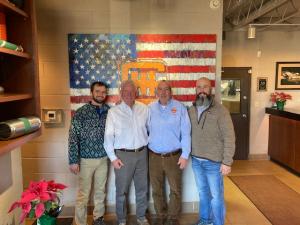 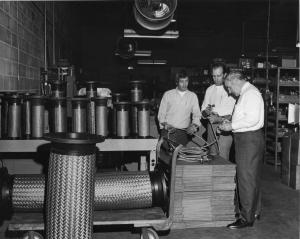 Southeastern Hose is in my blood, and I’ve been blessed to work alongside my brother Dick for all these years.”
— Incoming President Bill Travis

BREMEN, GA, UNITED STATES, February 19, 2021 /EINPresswire.com/ — Southeastern Hose, a leader in the hose and expansion joint industry, is excited to announce its new leadership team while celebrating the retirement of President Dick Travis. After 35 years at the helm, Dick Travis is handing the reins to his brother Bill Travis. Brothers Bill and Dick Travis are empowering the next generation of leadership by promoting from within the ranks. Rick Price and Trey Travis are being promoted to vice president positions after having proven themselves by successfully serving a number of roles within the organization.

Dick Travis started his career at Southeastern Hose in 1969 and was named president in 1988, taking over for his father, Bill Travis Sr. During that time, he has exponentially grown its sales while excelling at customer relations. Southeastern Hose is one of the largest fabricators in West Georgia and its 50 dedicated employees make it one of the top five largest employers headquartered in the area.

“It has been my honor and privilege to be part of the journey at Southeastern Hose to become a leader in the industry,” said Dick Travis. “I am enormously proud of the entire Southeastern Hose team and what we have accomplished together. The company’s incoming senior leadership team is more than prepared to take the reins of the company, and I look forward to watching them lead Southeastern Hose to even greater heights.”

Incoming President Bill Travis began working at Southeastern Hose in 1983 and was promoted to vice president in 1987. He has been a key leader and innovator in the industry nationwide while remaining committed to supporting, hiring and training employees from the West Georgia community.

“Southeastern Hose is in my blood, and I’ve been blessed to work alongside my brother Dick for all these years,” said Bill Travis. “I am excited to lead this company and prepare the next generation, including my sons Trey and Rick, to take over when that time comes, but it won’t be too soon.”

In his new role as vice president, Rick Price oversees sales and customer relations. He began working at Southeastern Hose in 2003. His first job at the company was working on the factory floor before he was promoted to inside sales, where he worked for more than 14 years.

Vice President Trey Travis is now in charge of assisting the head of sales and daily operations. He worked on the factory floor before being promoted to inside sales where he’s spent the last three years.

As a way to learn the industry from the ground up, both Rick Price and Trey Travis worked at Southeastern Hose during the summer while they were in middle school and high school.

About Southeastern Hose, Inc.
Established in 1963, Southeastern Hose, Inc. is a leading manufacturer in the Hose Assembly and Expansion Joint Industry. With more than 500 years of combined experience, from welding, fabricating, sales, and administration departments, the knowledge, capabilities, and expertise of the Southeastern Hose team is unsurpassed. Southeastern Hose is a leading fabricator of flexible metal, rubber, PTFE, and composite hose assemblies and expansion joints, pump connectors, hydraulic, pneumatic, and jacketed assemblies, chemical transfer, tar and asphalt, air, coolant, and stripwound hose. Additional offerings include an assortment of fittings, couplings, and adaptors along with components in a wide variety of types, sizes, and materials. For more information about the company, please visit www.sehose.com.