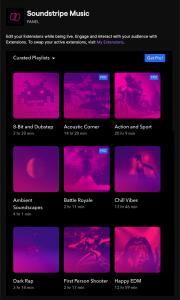 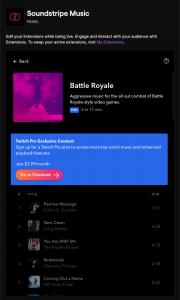 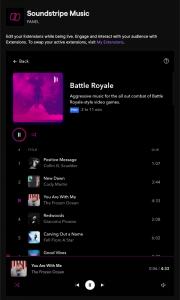 Both the free and Pro versions of the Soundstripe Twitch extension aim to help streamers avoid the frustration of video takedowns due to copyright claims.”
— Trevor Hinesley, Co-Founder and CTO of Soundstripe

The new Twitch Pro version adds three highly requested features, including the ability to create custom playlists from Soundstripe’s diverse catalog of high-quality music, shuffle playlists during a livestream, and get exclusive playlists curated by Soundstripe’s Grammy award-winning music team. Streamers access the extension directly within Twitch, and the Pro features can be activated for $3.99 per month or just $36 per year.

“After seeing the rapid adoption of our free Twitch extension and the many requests for enhanced features, we went to work building new tools to make it even easier for streamers to customize playback of our high-quality music catalog and continue avoiding copyright takedowns,” said Trevor Hinesley, Co-Founder and CTO of Soundstripe. “Both the free and Pro versions of the Soundstripe Twitch extension aim to help streamers avoid the frustration of video takedowns due to copyright claims and align directly with our company mission to Keep Creators Creating.”

Twitch streamers continue to seek solutions for including music in their livestreams and archived videos on demand (VOD) without the risk of triggering copyright claims and subsequent video takedowns. Soundstripe’s solutions aim to provide streamers with copyright-safe alternatives at various accessible price points, including free.

Twitch Pro Subscription – NEW
– Features: Adds ability to create custom playlists from the full Soundstripe catalog, shuffle playlists, and access exclusive music for streaming
– Supported Platforms for Posting: Twitch livestreams and VODs
– Pricing: $3.99 monthly or $36 annually
– Where to Sign Up: In the Twitch Free Extension [https://dashboard.twitch.tv/extensions/hnn88flma6mymdga2wt3v9aww7oobs] or on Soundstripe [http://soundstripe.com/twitch]

Soundstripe Music Subscription
– Features: Adds stems and additional versions of every song in the catalog
– Supported Platforms for Posting: Twitch livestreams and VODs, PLUS all other platforms, including YouTube and Facebook
– Pricing: $19 monthly or $149 annually
– Where to Sign Up: Soundstripe [http://soundstripe.com/twitch]

About Soundstripe
Soundstripe is one of the industry’s fastest growing providers of unlimited, royalty-free music, stock video, and sound effects for use in videos, podcasts, and other media projects. It is driven by a unique subscription model that lets content creators pay a fee for usage of all the media in Soundstripe’s catalog, with a la carte licenses also available. This approach has led to more than 6 million licenses being issued for tens of thousands of customers in more than 140 countries since Soundstripe’s inception in 2016.

The company is based in Nashville and was named to the Top 100 of the 2020 Inc. 5000 list, cementing its place as one of the fastest-growing private companies in the U.S. It was selected for The Tennessean’s Top Workplaces list in both 2019 and 2020, winning special awards for Values and Best in Leadership for co-founders Travis Terrell, Micah Sannan, and Trevor Hinesley. Soundstripe also won the Game-Changing Startup award in the Entertainment, Sports, and Media category at The Nashville Entrepreneur Center’s 2019 NEXT Awards, and was named one of the city’s Top 10 startup cultures by Powderkeg. For more information, visit soundstripe.com.