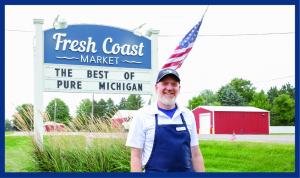 TRAVERSE CITY, MICHIGAN (MI), UNITED STATES, September 13, 2021 /EINPresswire.com/ — In March 2021, economists said the worker shortage in the U.S. was tied to ongoing health concerns, lack of childcare and a boost of unemployment benefits. The U.S. Chamber of Commerce, in announcing a national initiative to address the worker shortage, called it the most critical and widespread challenge facing business.

The worker crisis is commanding attention of most everyone and has had devastating consequences for many businesses. However, at a time when help wanted signs dot much of northern Michigan, Dave Sears, owner of Fresh Coast Market, is among the fortunate.

But not by luck.

He is nearly fully staffed at 55 employees even with the seasonal August exodus of college and high school students. And among his team at the Traverse City specialty foods store, minimal turnover and low absenteeism are a norm.

It isn’t by happenstance.

Sears takes an approach to employment that he says is grounded in valuing employees and a positive workplace culture – leading in a style shown to him 30 years ago by a manager who made a lasting impression on Sears, then in his early 20s. “That leadership style was around that people mattered,” Sears said. “He really helped me see the value in people, and we had fun.”

SAN FRANCISCO, CA, US, September 22, 2021 /EINPresswire.com/ — Technological advancements in the online booking of medical mobile vehicles are creating growth prospects in the […]