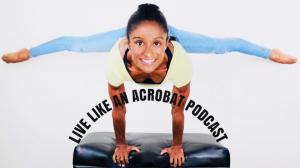 LOS ANGELES, CALIFORNIA, UNITED STATES, May 27, 2021 /EINPresswire.com/ — ” Black Circus Lives Matter “, #METOO In Circus;” As an African American woman, World Renowned Circus artist, former Two-Time World Acrobatic gymnastics Champion, both episodes hosted by Shenea Stiletto were very personal. She revealed, for the first time, the disparity and assault culture that is mostly unknown to the general population who love circus companies like The Cirque Du Soleil. Having worked for the top circus companies for decades, Shenea Stiletto experienced an obvious lack of inclusion and equity in an environment that, in her opinion, is anarchical, existing in a “parallel universe” with very few regulations or oversight. She was frequently overlooked or excluded, despite having received international adulation and made outstanding achievements as, what she calls, a Circuspreneur.

As a Survivor of USA gymnastics, she is currently fighting the Olympic giant in bankruptcy court. Through her “Live Like and Acrobat Podcast” Shenea Stiletto reveals the similarities between the circus environment and the gymnastics environment and strives, through her numerous media projects, to bring light to the humanity of those that work and compete in these systems. “It’s really not even about making it into the top one percent; even those with a lot of clout within the circus industry lose out horribly” she explained. “And we saw during the pandemic that as a circus industry that brings in billions for the entertainment industry at large, that we for the most part are left high and dry.”

Shenea Stiletto knows that only the unionization of the circus industry will bring about real change through government regulations and policies.

“It’s been hard speaking about issues like these within the industry while I`m still working in it myself, but something must change. Circus artists and the vast circus community, can no longer allow ourselves to be exploited endlessly for the benefit of larger entities and corporations without any autonomy. There are a multitude of issues that I address in the “Live Like An Acrobat” podcast because the circus industry is so complex. Yes, Circus Arts is a tough business, and yes, it should receive the respect of other art forms that have actual recognition on a legislative level. My podcast, “ Live Like An Acrobat” is my gift to the circus industry that I love wholeheartedly, and to which I have contributed to with every facet of my life alongside countless others who have literally made this industry what it is.”

For more information you can reach Shenea Stiletto on Instagram