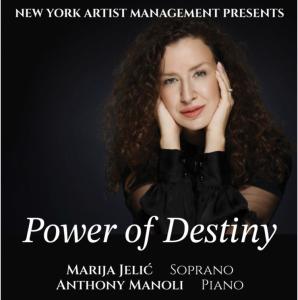 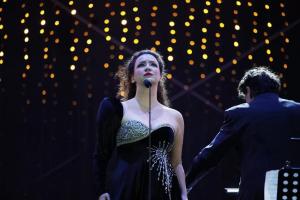 American Premiere on Tuesday, October 5, 2021 to Showcase ‘Power of Destiny’

Marija has performed with Jonathan Tetelman, and this season has sang alongside Elīna Garanča, Placido Domingo and Jose Cura. Her impressive and emotive sound will be highlighted with her renowned acting abilities as she takes the stage. Classical takes of each song will impress all ages in the audience with relatable movements and stunning renditions by the soprano.

A beautiful tapestry of music throughout the night will be created by the artist who has a unique background and history. Marija was born in Belgrade, Republic of Serbia. Later in life she completed a Faculty of Electrical engineering at University of Belgrade and learned singing as she finished master studies in opera.

In 2017 Marija passed an audition for an opera studio in the National Theater in Belgrade and started to sing small and main roles in opera productions. Marija was performing in the opening of Ohrid summer festival 2020, Beethoven 9th symphony in Plovdiv summer festival, Micaela in Carmen concert version with Elina Garanca in Ljubljana summer festival 2021, concert with Jerusalem symphony orchestra and production of La Boheme with role of Mimi in Israel and Estonia in 2021.

Later in main halls and concerts in Serbia her talents were witnessed with biggest orchestras in Serbia “Stanislav Binicki” at Kolarac Hall, Radio television orchestra, orchestra of Serbian National theater and she performed in Belgrade summer festival.

Following this stage of her career were performances in the opera gala concert at the German summer festival in Wernigerode. From there she went on to sing a Parisian requiem in Moscow International Music Center. She was singing ten concerts with St. Petersburg Symphony Orchestra and Maestro Darrel Ang (Mariinsky Theater) in National Library in Beijing, Dongying Grand theater, and Liniy Snow Lotus Theater.

Marija debuted with the role of Mimi at the Serbian National Theater in Novi Sad. She performed Micaela at Croatian National Theater in Osijek. She was also singing in Moscow with Bryansk Governor Orchestra and St. Petersburg State Symphony Orchestra in St. Petersburg. She was also singing in the city of Bryansk (Russia) with the Bryansk governor orchestra.

New York Artist Management is proud to present the October 5 performance at the Weill Recital Hall at Carnegie Hall. Tickets are now on sale for $20 to $40. All attendees must show proof of vaccination at the venue. The show will take place at 8:00pm.

For more information on the concert please visit: www.carnegiehall.org/calendar/2021/10/05/marija-jelic-soprano-anthony-manoli-piano-0800pm.