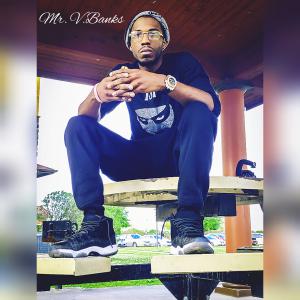 Mr. V. Banks is an emerging artist, producing music in experimental, Hip Hop and rap genres. Banks describes his music as therapeutic and claims that his sounds

HOUSTON, TEXAS, UNITED STATES, May 5, 2021 /EINPresswire.com/ — Mr. V. Banks is an emerging artist who is passionate towards working for his career in music. He is a single father who is raising triplets. According to Banks, his triplets are his main source of motivation. Banks says that raising triplets and making music simultaneously is not an easy task. But Banks passion in music motivates him to make new music and work towards his career and he would never trade the life he has right now for anything.

Banks believes in making music that motivates people; exactly how music motivates him to get through life. He believes in making inspirational content, something that his followers and listeners can relate to and feel the lyrics with all their emotions. He wants his followers to find the ones they are seeking in his music and he wants his followers to know that they are not alone in their journey. Banks asks his listeners to know that they can reach out to him if they ever feel like they have nobody who would listen to them and to hear their problems.

His inspiration for music is The Pioneers that are still making quality music in the music industry. He aspires to continue his music dream without any barriers such as age. Banks says that age is just a number and can never outrun passion. On the 25th of April 2020 Banks released his single called “Fabulous” produced by Pleur Beats and mix and mastered by High Rollin Inc Engineer K.Hu$$le. His single has one goal behind it; to motivate its listeners. Banks wants to establish a music firm so he can help artists that struggle around him in their weak areas. He believes in giving back to the industry and hence wants to work on the artists of the future.

Banks is all set to release new relatable music which is authentic and will appeal to his audience. Watch out for new music from Banks by following him on his social media. Banks wants his fans to know that he is approachable and can be contacted via his email address if they ever feel the need to talk to Banks about anything in the world be it music or anything about their lives. Banks believes that his fans should have somebody they can talk to and he wants to be the person they can easily approach when times are rough.

Do not forget to check his website and his new single at https://distrokid.com/hyperfollow/mrvbanks/fabulous

Mr. V. Banks is a Hip Hop Musician /Businessman from Houston, Texas who carries a passion and drive to help others. He has been making music since 2008. His inspiration is to guide the lost to The Light. Banks is determined to start a Music firm to help artist excel in their music career.