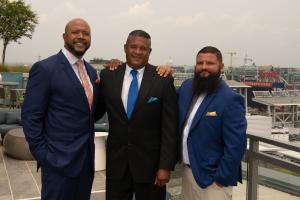 Cyber attacks on energy companies are a growing threat. With 3,000 U.S. cyber software companies rushing in to help, which “fix” is most effective?

The Colonial Pipeline hack is just the tip of the iceberg, as many such incidents go unreported.”
— Omar Dennis

WASHINGTON, DC, UNITED STATES, October 18, 2021 /EINPresswire.com/ — Cyber attacks on energy companies and electricity systems are a substantial and growing threat, as these cyber crimes have cost publicly-owned utilities millions of dollars in losses and ransoms paid. Last year energy was identified as the number one target for cyber attacks, attracting 16% of all attacks worldwide.

With $120 billion in new investment into infrastructure improvements, grid modernization, and cybersecurity software to prevent such attacks, and more than 3,000 U.S. cyber software companies rushing in to help, which “fix” to the problem of hacking-related blackouts is most effective?

Omar Dennis, the CEO of Sedulous and a longtime provider of cybersecurity solutions to the Department of Defense and other U.S. agencies, argues in Forbes (see article here) that a recent saturation of software solutions are leaving many companies in a bind because they don’t know which software solution is best. Recent news about the Colonial Pipeline hack (which paralyzed the movement of fuel through the Southwest U.S.) is just the tip of the iceberg, Dennis argues, as many such incidents go unreported.

Since January, Sedulous has seen 200% growth, tripling its client base in software consulting to meet demand from the U.S. Government and companies eager to prevent an onslaught of cyber attacks, given the increasingly digital power grids of the U.S. and Western Europe. In August, Sedulous acquired Infinity, a large logistics and security company, from founder/CEO Lindo Bradley, to expand its offerings.

Omar, who spent 17 years in the United States Marine Corps primarily working on tech or cyber-related projects, is not convinced the grid or any energy infrastructure is secure. He has a great story to tell, including how grid operators are deploying software to plug holes left by software, to prevent hacking-related blackouts.

Let us know if you’re a reporter or writer on deadline with a cybersecurity-related story and would like to schedule an interview.