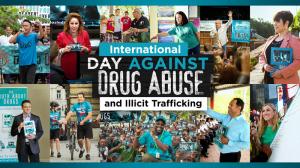 *Voices for Humanity, the only ongoing television series dedicated to those working in the streets, schools and communities to combat drugs and other major social ills

*PSAs to raise awareness of the dangers of drug use, and

*The Truth About Drugs documentary, a powerful and comprehensive look into the true dangers of drugs—from marijuana, opioids and synthetic street drugs to the addictive pharmaceuticals marketed with slick Madison Avenue advertising campaigns.

June 26 is set aside annually as World Drug Day. The United Nations Office on Drugs and Crime (UNODC) describes this as “a day to share research findings, evidence-based data and life-saving facts, to continue tapping into a shared spirit of solidarity.”

UNODC “invites everyone to do their part, by taking a firm stance against misinformation and unreliable sources; while committing to sharing only the real science-backed data on drugs and save lives.”

In his message for the day, UN Secretary-General António Guterres urged the world community to take action: “The world drug problem remains an urgent challenge that threatens to exacerbate pandemic impacts and hinder a healthy and inclusive recovery.” He called this year’s World Drug Day theme—Share facts on drugs. Save lives—“a call for solidarity.”

Visitors watching episodes of Voices for Humanity were introduced to drug prevention activists from across the U.S. and such diverse countries as Kenya, the Philippines, Czech Republic and Malaysia.

The Scientology Network debuted on March 12, 2018. Since launched with a welcome by Scientology ecclesiastical leader Mr. David Miscavige, the Scientology Network has been viewed in 240 countries and territories worldwide in 17 languages. Satisfying the curiosity of people about Scientology, the network takes viewers across six continents, spotlighting the everyday lives of Scientologists, showing the Church as a global organization, and presenting its social betterment programs that have touched the lives of millions. The network also showcases documentaries by independent filmmakers who represent a cross-section of cultures and faiths, but share a common purpose of uplifting communities.

Broadcast from Scientology Media Productions, the Church’s global media center in Los Angeles, the Scientology Network is available on DIRECTV Channel 320 and can be streamed at www.Scientology.tv, on mobile apps and via the Roku, Amazon Fire and Apple TV platforms.