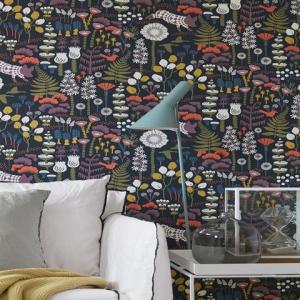 Bright & colorful wallpaper known as “Scandinavian” have become hot in 2021. People are moving away from earthy neutrals and desiring patterns with more flair.

ODESSA, FLORIDA, UNITED STATES, May 30, 2021 /EINPresswire.com/ — Wallpaper Boulevard is reporting a surge in the demand for Scandinavian wallpaper (also known as Boråstapeter wallpaper to many industry purists).

It seems like the American public is finally moving away from plain solid neutrals or textured earthy tones to bright florals that really make a room stand out.

“It started in 2019 but now we are really seeing an uptick,” says Erin Shanks, co-founder of Wallpaper Boulevard.” “People talk and dream about big and bold wallpaper patterns but the actual buying habits of US, at least when it comes to wallpaper, reflect a very conservative decorating mindset. We see most people buying samples of loud patterns but settling on something toned down when they’re actually ready to buy full rolls. But the last two years we have been our customers become bolder and take bigger risks. Maybe it was due to Covid or maybe it was due to the fact that Millennials are becoming a bigger percentage of our customers instead of Boomers and Generation X.”

Scandinavian patterns tend to be very colorful and loud. In the US, we would normally refer to these patterns are toiles. They typically incorporate folksy multi-colored animals, block florals (i.e., Block tulips), and abstract tree and forest scenes.

It’s definitely not the type of wallpaper you would say “matches with everything.” And yet, that is precisely what more people are wanting.

These types of patterns hail from Sweden, Norway, Denmark and The Netherlands. While the quality of life in those countries always rank very high on any list, the fact remains that those countries also have cold, rainy and dreary weather during most of the year.

From that environment, Scandinavian design was born to bring life into the area’s home décor.

How ironic that the people who created Law of Jante (basically stating that no one is better than anyone else) also created Scandinavian wallpaper!

Wallpaper Boulevard carries all types of Scandinavian wallpaper for any room in the house, including unique Boråstapeter designs from Hanna Werning. They feature the 17 major Scandinavian collections from Brewster, York, Wallquest and Patton.