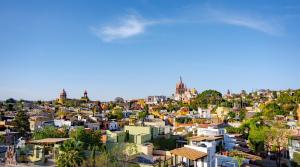 Each year, Travel + Leisure recognizes the top hotels, islands, cities, cruise lines, airlines, spas and more around the globe, based on the results of its annual readers’ survey. Readers rated cities on the following characteristics: sights/landmarks, culture, food, friendliness, shopping and value.
The Travel + Leisure World’s Best Awards 2021 is an essential, trusted source of inspiration and guidance as travelers once again make plans to set out on trips around the globe.

Diego Sinhue, Governor of the state of Guanajuato congratulated the people of San Miguel de Allende “your hospitality and friendliness is without question the reason why remain a favorite destination. I congratulate all the tourism service providers who have made this possible, this is a recognition of their great work. Thank you to the readers of Travel + Leisure magazine who are the ones who vote. It fills us with great pride!”

“This is the third time San Miguel de Allende has ranked No. 1 on the T+L World’s Best Awards, each time being very special for us, but this year the award is of special significance as it shows the love our visitors have for our city and the fond memories they have of our inhabitants,” said Gonzalo Gonzalez, Mayor of the city of San Miguel de Allende. “Travel + Leisure World’s Best Awards is a leading barometer of the places and companies that satisfy some of the most passionate and discerning travelers, and we want them to know that San Miguel de Allende is ready and welcoming all visitors with international protocols in place to ensure the health and well-being of our population and guests.”

One of the reasons San Miguel de Allende enjoys an enduring reputation with the readers of publications such as Travel + Leisure is its ongoing relationship with the arts and the experiential offerings it provides visitors.

Located in Mexico’s temperate Bajío region, San Miguel de Allende offers spring-like weather year-round. Boasting one of the world’s most well-known “golden hours,” the city has been a longtime popular destination for American expats who came to create all types of art works at the Institute Allende, where art classes can still be taken on a weekly or extended basis.

After years of functioning as an important part of Bajío’s regional textile industry — some of its historical machines and pipes are still on display — La Aurora Factory now houses art studios, jewelry and design stores, antique shops, a couple of restaurants and cafes, and some 50 galleries.

One of San Miguel de Allende’s most popular artworks are the oversized puppets that take part in every celebration in the city and have become commonplace at local weddings. At the Mojigangas 62 shop, you’ll find the local master of the artform, Hermes Arroyo, credited with rebirthing the giant papier-maché figures that sit atop people’s shoulders in local parades and festivals. The store features a packed assortment of unique Mexican handicrafts, but guests should make sure to schedule a class with Arroyo to create their own mini-Mojigangas — a unique souvenir not found anywhere else in the world.

Travel + Leisure World’s Best Awards 2021 is featured in the October issue of Travel + Leisure, on newsstands Sept. 17, and at www.travelandleisure.com. Other Mexican destinations to make the lists are Mexico City, Oaxaca, Merida in the state of Yucatan and Zihuantanejo as Mexico’s Top Cities.