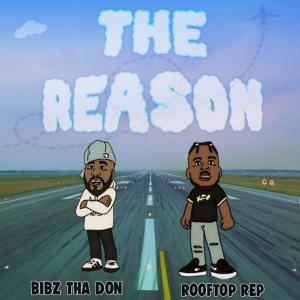 Rooftop ReP & BiBz Tha Don’s new record “The Reason” will have you reflecting on the most important things in life.

The release comes a few weeks short of the summer but just in time for Autumn, back to school, and last chances to end the year off right. The introspective record reflects a natural yet impactful progression for the artist. They gear up for their fourth-quarter releases with ReP dropping ‘MAGNUM OPUS 3’ and Bibz with ‘Love Life’; The Reason found present on both artist’s soon-to-be release projects.

With the recent release of The Reason, produced by Tone Jonez with supporting vocals done by BeeTaylor, ReP kicks off with the catchy hook three seconds into the production. ReP sets the tone with the self-reflective statement, “…You could be the reason/ or maybe your the reason, the reason to an outcome/ where would you be without one” both Bibz Tha Don and Rooftop ReP take turns giving their perspectives for listeners to digest and reflect on.

ReP and Bibz released an animation video as the official visual to complement the standout record, “The Reason.” The visual tells a story that turns into an adventure showing the contrast between things that can either help us grow or bring us down, directed by Dazzell Matthews (Creative Dir. of Don’t Be An Asshole) and Animation by George Slade (of GSC Animation).