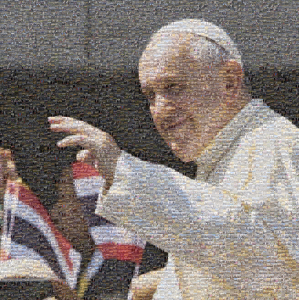 A photo mosaic of an image of Pope Francis during His Holiness’ Apostolic Visit to Thailand in November 2019. Minted as NFT on Kalamint.io (kalamint.io/token/42766)

“With the release of this NFT, the Roman Catholic Mission of Bangkok is looking forward to exploring a brand-new way to engage with those in our community and beyond,” said Francis X. Cardinal Kriengsak Kovithavanij, Archbishop of Bangkok.

“Youths today use technology, not only for practical purposes, but to also express their faith and identity,” added the cardinal.

The NFT to be released is a photo mosaic of an image of Pope Francis during the Holy Father’s Apostolic Visit to Thailand in November 2019. It is made up of 350 unique photos from the visit and signifies the 350th anniversary of the arrival of Catholicism in the Kingdom of Thailand.

“We hand-selected the photos that make up the mosaic from thousands of photos that LiCAS.news took during the papal visit,” explained Nattha Nuchsuwan, Marketing Director at LiCAS.news, the English language social communications arm of the Roman Catholic Mission of Bangkok. “We hope that the individual photos together, convey the excitement and devotion with which Thailand welcomed the pope.”

The mosaic is being released as an NFT to help ensure its permanence as well as to enhance the Roman Catholic Mission of Bangkok’s engagement with online communities around the world.

“We are pleased to be using the environmentally-friendly Tezos blockchain technology on Kalamint to drop our NFT,” said Dr. Peter Monthienvichienchai, Executive Director of LiCAS.news and the project’s technical lead.

Speaking about this drop, Kalamint CEO Chris Deschenes remarked, “We are extremely excited that the Roman Catholic Mission of Bangkok have chosen Kalamint and share the ideals that NFTs can be created and sold in a sustainable and energy efficient way. It has been our goal to ensure that the art created on our platform is stored in a way that allows the data to last forever. With this historic piece minted by the Church, we surely have the affirmation that what we are building is on the right path.”

All proceeds from the release and auction of the NFT will go to Communita Incontro School in Pathum Thani, Thailand. Established in 2004, the primary school provides free education to socially disadvantaged children, especially those whose parents are being treated in the nearby rehabilitation center (with the same name) for drug addicts.

The school provides all support for the children to meet their daily needs, including clothing, food and school supplies.

About Kalamint:
Kalamint, a leader of the Clean NFT movement, is one of the first marketplaces on Tezos, an LPoS (Liquid Proof of Stake) blockchain that effectively verifies transactions while consuming a miniscule amount of energy. Backed by Tim Draper’s Draper Goren Holm Ventures, Amesten Capital, and Moonwhale Ventures among others, Kalamint is one of the only NFT marketplaces which does not store any NFT data on private servers and builds its reputation around the legacy of the art.