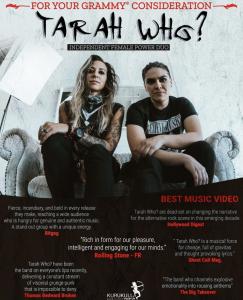 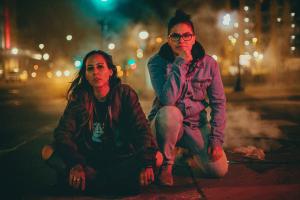 LOS ANGELES , CALIFORNIA, UNITED STATES, November 1, 2021 /EINPresswire.com/ — The talented rock duo, Tarah Who?, is officially in the first round of Grammy consideration for ‘Best Music Video’ for their video ‘Supposedly a Man’!

The powerful song is from their brand new album of the same name. Every song on this album is exposing an emotion, an event, a behavior- real life moments that leave an impact. Written and recorded by Tarah Who? In collaboration with their producer, Jason Orme (Alanis Morissette), this amazing album was released on September 24th.

This duo is the powerhouse team of Tarah Carpenter and Coralie Herve. LA based by way of France, they are today’s answer to the alt/punk rock of the 1990’s. They draw their inspiration from their life experiences, allowing audiences to connect on a human level. They are bold, they are powerful, they are Tarah Who?.

You can listen to their music now and keep up with their upcoming work through their website!

“Tarah Who? Is a musical force for change, full of gravitas and thought provoking lyrics.” -Ghost Cult Mag

“Tarah Who? is a fascinating flashback to 90’s rock with anthemic singalong choruses and a raw grungy edge. They aren’t afraid to do their own thing with their unique brand of intense, engaging rock.”
– Gig Radar UK

“Tarah Who? is a spiritual and alternative option that is inspired by 90’s alt-rock and grunge tradition, blending meaning and message with carefully produced and interpreted music. […] Tarah Who? is fierce, incendiary, and bold in every release they make, reaching a wide audience who is hungry for genuine and authentic music. Tarah Who? is a stand-out group with a unique energy.”
-Bitgog