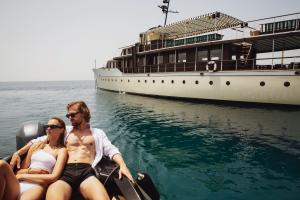 One of a handful of surviving pre-War classics, the 33-meter yacht is owned by award-winning film director/writer Roland Emmerich (Independence Day, Godzilla, The Day After Tomorrow, Midway, and more), his latest movie, Moonfall, starring Halle Berry, Patrick Wilson, and Donald Sutherland, is scheduled for release in early 2022.

Roland Emmerich says: “When I was first introduced to Maid Marian 2, I instantly fell in love with her. Over the past 15 years, she’s been the focus of many memorable holidays for me, my friends, and family. There’s a magical feeling once you set foot on Maid Marian 2, which intensifies once you set sail. The crew helps you feel relaxed and at home, providing top-level service for everyone. With the stunning backdrop of Greece’s islands and the azure Aegean, I’m sure that you and your loved ones will enjoy making memories aboard this unique and luxurious classic yacht.”

The transformation of Maid Marian 2
Over the past nine months, the yacht has had an extensive refit, including engineering work, a full repaint, and remodeled upper deck.

A structural redesign of the upper deck has dramatically extended external space to nearly 100 square meters, offering a substantial open-space sunbathing zone where guests can delight in panoramic vistas of the Aegean Sea. An up-to-date, fully-stocked bar of premium liquors and spirits adds a dash of Hollywood glamour. Although the vessel celebrates classic traditions, guests can groove to music from the latest sound system – a sort of sleek Spotify-by-the-sea.

Maid Marian 2’s interiors have been spruced up with fabrics in vibrant shades alongside signature black and white accents, chic vintage furnishings, and contemporary artwork hand-selected by Emmerich from his personal collection.

Maid Marian 2 can welcome up to 10 Thalassophiles (a Greek term for those attracted to the sea) in five contemporary, capacious suites (three with ensuite bathrooms), each with their own distinctive look and flavor – and an expansive ocean view.

Maid Marian 2 History
Built in 1931 by the New York Launch & Engine Company, the yacht first known as Cleopatra launched in New York’s Hudson River. Two years later, after passing from her first owner, Mr. Baldridge, to Ms. Ruth Nash Bliss, her name was changed to Maid Marian 2. The legendary classic served in World War Two as a patrol boat for the US Coast Guard; then followed her owner to Palm Beach, Florida.

Decades later, Adrian Zecha, founder of Aman Resorts, purchased the cruiser and shipped her to a new berth at Amanpuri Resort in Phuket.

In 2007, film director/writer Roland Emmerich, who has a passion for sailing, acquired Maid Marian 2. Commissioning British designer John Teall to reimagine and redesign the iconic yacht, Emmerich moved the old girl to Greece in 2015. Since then, Maid Marian 2’s been available for private charter, offering comfort and luxury to those wanting to explore the Greek Islands. The elegant cruiser’s also been a location for high-end photoshoots and a hotspot for A-list parties.

Whether guests desire marine exploration or time to simply chill, Maid Marian 2’s concierge can design tailored itineraries for the ultimate in Greek island-hopping to islands such as Kythnos, Serifos, Sifnos, Paros, Antiparos, Mykonos, and more.

Your journey could begin in Athens – perhaps allowing friends and family to board en-route – venturing to remote locations and secret anchorages under blue skies and with crystal clear waters rich in marine fauna. Or, simply surrender to the vibes and rhythms of the more popular isles.

Get inspired
A stay on the graceful Maid Marian 2 offers the supreme sailing experience. A seven-night luxury trip costs around $80,000, based on 10 adults sharing the yacht on a full-board basis, including meals, drinks, and fuel. This price applies to departures between May to September. Flights are not included. 2022 bookings are currently open.