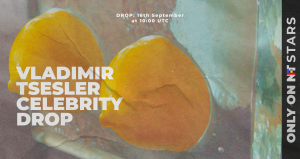 SYDNEY, AUSTRALIA, September 13, 2021 /EINPresswire.com/ — The NFT marketplace NFT STARS presents the artwork of a contemporary Belarusian artist Vladimir Tsesler, famous for hybridizing real and the imaginary worlds and for fostering the culture of memes. The NFT marketplace will auction the work titled “Limonchella”, which was exhibited at Biennale di Venezia in 2005. The auction starts on September 16th at 10:00 UTC.

Adjusting the Viewer’s Optics
Vladimir Tsesler is a contemporary Belarusian artist who started creating his first pieces back in the 1970s. Since then, the artist has tried his hand at multiple art mediums: paintings, graphics, sculptures, art shares, industrial designs and posters covering political and social issues. In Vladimir’s artwork, everyday objects take on a new look and are used in unexpected settings, metaphors and allegories. Through the merging of the unexpected and the hybridization of real and imaginary worlds, he reveals the true meaning behind his art.

Hailing from Belarus, Vladimir Tsesler has exhibited his artwork all over the world. The “Woodstock 30 years” poster is part of the Le Louvre Musée de la Publicité collection. The artist gained a lot of recognition for his “Project of the century (12 from the XX)” which features 12 sculptural portrait images of 20th-century artists in the form of an egg. The soon-to-be-auctioned artwork “Limonchella” is a part of Tsesler’s Optics collection and was exhibited at Biennale di Venezia in 2005. The collection, in its entirety, was on display in Moscow, Russia this summer and is now headed for European galleries. The different art pieces in this collection help the observer to look through the layer of ordinary things and notice the unexpected beauty that lies there.

NFT STARS is to host the auction for Vladimir’s artwork “Limonchella”, which was created in a Murano glass factory in Italy. The Murano glass is perceived as a symbol of high quality and the originality of the Italian glass artists. The material and stories associated with it inspired Tsesler to create “Limoncella”. The artwork reflects the ever-changing standards of beauty and the eternal human desire for pleasure. The auction is scheduled for September 16th at 10:00 UTC. The winning bid will get the NFT and a poster signed by the artist.

About NFT STARS
NFT STARS is a new NFT marketplace that provides its users with a unique set of products and services. The marketplace follows a strict selection approach to artists. Every creator featured on the platform is either chosen by the executive board or voted for by the community. Thus, the NFT STARS team is able to provide truly special treatment to the chosen few NFT stars. Artists enjoy Gas-free minting; NFTs are minted at the time of purchase and the buyer covers the costs. The marketplace supports the free flow of ideas and enables artists to mint artwork as a team, via the collective NFT ownership feature and share the proceeds from its sale equally. Among other things, NFT STARS has launched its own NFT avatar collection – SIDUS: NFT Heroes – which features unique characters that can be used as a social media avatar or be transformed into a gaming character in the SIDUS DAO metaverse.