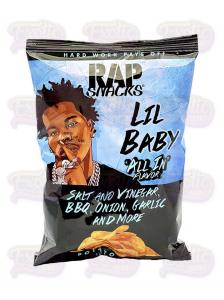 Lil Baby All In Flavor

Rap Snacks are now available at Walmart across the US

With the additional distribution through Walmart, we have the opportunity to meet our demand. We’re grateful for the partnership and look forward to adding additional products in the future.”
— James Lindsay/CEO Rap Snacks

LOS ANGELES, CA, UNITED STATES, September 29, 2021 /EINPresswire.com/ — The widely anticipated Lil’ Baby product can now be found on the shelves at Walmart across the United States. Top seller “All In,” is now available.

“Our customers love the Lil’ Baby line,” says James Lindsay, Founder and CEO of Rap Snacks, the only snack brand that features A-list hip-hop artists on its packaging. “With the additional distribution through Walmart, we have the opportunity to meet that demand. We’re grateful for the partnership and look forward to adding additional products in the coming months.”

About Rap Snacks
Rap Snacks was developed by CEO James Lindsay in 1994 and celebrated a relaunch in 2017.

By partnering with some of the rap game’s most recognizable names such as Cardi B, Migos, Lil Boosie, Master P and Romeo and more, the brand has become one of the most visible hip-hop geared snack products over the last few decades. Rap Snacks has been featured on the CBS Morning Show, The Jimmy Kimmel Show, BET, Forbes and more. Most recently Rap Snacks has branched into beverages, having launched a 5-flavored lemonade line with Lil’ Baby to debut in the Fall. Rap Snacks are sold in major retail stores across America, including Walmart, Kroger, and Target stores, among other outlets

About James Lindsay
James Lindsay is the Founder and CEO of Rap Snacks. He created the brand to cater to the hip-hop culture. He began by started selling in convenience stores; currently, Rap Snacks are sold in major retail stores across America. Over the past 12 years Lindsay has been featured on the CBS Morning Show, ABC’s The Jimmy Kimmel Show, BET, Fox News, People Magazine, The Tavis Smiley Show, Black Enterprise, Forbes, and Entrepreneur Magazine. He was also recognized by Business Philadelphia Magazine as “Top 100 People to Watch,” among others.

James Lindsay and Percy (Master P) Miller are partners in PJ’s Foods, and Miller is a limited partner in Rap Snacks.