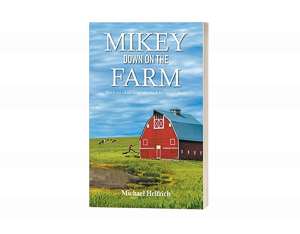 Mikey Down on the Farm

The importance of instilling values at an early age

COOKSTOWN, NEW JERSEY, USA, September 29, 2021 /EINPresswire.com/ — Societies and cultures often have a certain expectation from men. They are seen as breadwinners, expected to be strong for the sake of their families. Men are expected to be leaders and to have a certain sense of responsibility. This is especially true for the religious, as religion often dictates how men must behave. Strength and wisdom are often demanded of men and that their knowledge be passed on to their sons. But as we are only human, there are often people who fail. “Mikey Down on the Farm,” tells the story of a man who believes that there is a better way to raise sons.

Michael Helfrich was born and raised on a farm. His parents faced difficulties bringing him up because they lacked the knowledge to do so. Helfrich flunked through his first grade and only later on realized that his learning issues were caused by dyslexia. This condition prevented him from finishing high school, so he joined the Navy in 1960. Helfrich was honorably discharged in 1964 and found his life partner in 1968. He and his wife are celebrating their 53rd wedding anniversary in 2021. He found his passion for writing when he converted to Christianity in the 1970s. His newfound religion has shaped the many articles he has written coming from various perspectives.

“Mikey Down on the Farm” tells the story of a young boy who grew up neglected by his parents. His life was mostly uneventful and the events that he found himself in were not given much attention. The book dwells heavily on the responsibility of men to be good fathers and husbands. It stresses the need for a moral compass which decides how sons would be taught the difference between good and bad. The author also gives much importance to how love needs to be firm and just, and that goodness must come from an understanding of God’s word.

Raise your sons to be good men with your own copy of “Mikey Down on the Farm” today!

Visit the author’s website at www.authormahelfrich.com to know more about him and his book.

Writers’ Branding is a full-service self-publishing company that provides aspiring authors exclusive access to publicity and a pool of book evaluators and marketing creatives and bridges them to literary agencies and traditional publishing houses. Please visit www.writersbranding.com for more information.