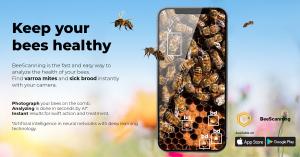 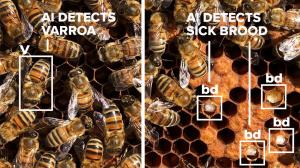 BeeScanning is the world’s only varroa mite detection tool that truly saves and protects the bees. It’s fast and accurate and saves time, bees and materials.

Over the last 12 months, BeeScanning has been used to accurately analyze more than 24 million bees across the globe for varroa mites – without killing a single bee.”
— Björn Lagerman

ÖREBRO, SWEDEN, October 20, 2021 /EINPresswire.com/ — Varroa mites continues to plague the worlds honeybees and beekeepers. The mites are time consuming to find with the naked eye, and it is impossible to accurately establish how many mites there are in a hive by just looking. What takes the eye minutes to find, the BeeScanning app detects in just seconds. Without hurting a single bee.

The most common way to find and count varroa mites is to shake or “wash” a selection of bees in isopropanol. In other words – drown the bees in alcohol. The varroa mites fall off the dead bees and can then be counted. A procedure that requires the beekeeper to sacrifice up to 600 bees per hive to get statistically valid results. A contra productive method as all the beekeeper really wanted to do was to understand the health of the bees and treat accordingly.

Swedish bee-health company BeeScanning has a smart bee-friendly solution. Beekeepers that use the BeeScanning app simply photograph their bees with their smartphone camera. The pictures are instantly uploaded to BeeScanning’s servers and analyzed in seconds by the company’s trained AI. An accurate, easy to use and 100% bee-friendly method. There is no need for alcohol washing, BeeScanning tells you if there is need to treat.

“BeeScanning is the world’s only varroa mite detection tool that truly saves and protects the bees. It’s fast and accurate and saves huge amounts of time, bees, and materials”, says Björn Lagerman, founder of BeeScanning and a passionate beekeeper since 1970. “Our method also produces objective documentation that bring a unique basis for further bee research and breeding”.

To take in to account hidden varroa mites under the bees’ wings or under their abdomen the AI analyze result is calculated in percent number of varroa versus the number of bees. A factor is used to multiply the result compensating for hidden mites. This factor derives from extensive lab tests comparing AI-results with alcohol washing. Over the last 12 months, BeeScanning has been used to accurately analyze more than 24 million bees across the globe for varroa mites – without killing a single bee.