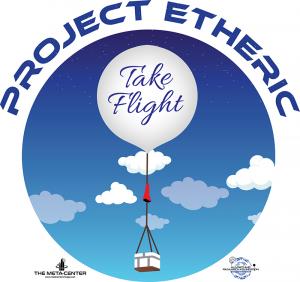 The balloons will gather data to help understand a strange and unusual reality.

USA & UK, September 25, 2021 /EINPresswire.com/ — Project Etheric is the codename for the Meta-Center of Chicago’s atmospheric balloon launch campaign. Project Etheric will be launching its next series of atmospheric balloons near Atlanta, Georgia, on September 25, 2021. This event is free and open to the public, so those who wish to learn and participate are welcomed to attend.

Weather balloons, which are normally made from latex or synthetic rubber, are filled with either hydrogen or helium. Interestingly, a weather balloon’s sides are roughly 0.051 millimetres thick before release, but can thin out to 0.0025 millimetres at typical bursting altitudes. The balloons start out at around 6 ft. wide before release, but can expand up to 20 ft. in diameter! These balloons can rise to an altitude of around 24 miles or more, before bursting. The payload may land up to 75 miles away depending on wind conditions at the launch site.

Instruments, like the radiosonde, are attached to the balloon to measure pressure, temperature and relative humidity as the balloon ascends into the atmosphere. These instruments are made to endure extreme conditions, while transmitting data to tracking equipment on the ground at set intervals. By tracking the position of the radiosonde, wind speed and direction can be calculated.

Once the weather balloon bursts, the radiosonde falls slowly and safely to the ground with the help of a parachute. Radiosondes typically contain a mailing bag and instructions on what to do if members of the general public find one. Interestingly, around 20% of the radiosondes sent up each year in the United States are found and returned. These instruments are normally repaired and reused.

Weather balloons are a primary source of data above the ground and provide valuable input for computer forecast models, local data for meteorologists as well as data for research.

ABOUT THE LAUNCH
Project Etheric’s first set of atmospheric balloons was launched on July, 31st, 2021 in New Lenox, Illinois. Footage of the journey (from launch to retrieval) is available on the Project Etheric website.

A third launch is planned for Arizona in mid-October. The Chicago-based community organization seeks to offer more publicly accessible STEM-related activities to inspire youth and adults through hands-on projects that may help create the next scientists and engineers.

Each Project Etheric launch will make use of more data capturing equipment than the last in order to capture a wide variety of data (including audio and video). Over the last few years the The Meta-Center of Chicago has been having many public and private projects to exercise a thesis. Rather, it is about e.s.p. (extra-sensory perception), space, time, the intricacies of inter-species communication, which is commonly known as the hundredth monkey effect, and much more. The hundredth monkey effect is a hypothetical phenomenon in which a new behavior or idea spreads rapidly by unexplained means from one group to all related groups once critical members of one group exhibits the new behavior or idea. An example of this can be found on the widely separated Japanese islands, where troops of monkeys spontaneously acquired a new behavior (washing sand off food).

ABOUT THE META-CENTER
The project lead Totukani Amen Is a well-known Metaphysician, herbalist and engineer has been in many STEM-related fields for decades. Totukani Amen teaches others a multitude of subjects, including more obscure ways to use math in order to infer solutions that may not have been readily known or attainable. He has many published works and has dedicated his life to seeking out and understanding the strange and unusual of what we call reality. Having hosted a multitude of events across the United States over the last two decades, Totukani Amen demonstrated to others the intricacies of our shared reality.

“This project was not a sole endeavour. A special thank you to Marisela Arellano and Aneez Ali for their specialized assistance from content marketing to social engagement. The creativity put forth had everyone smiling and excited for what would come forth,” said Totukani Amen.