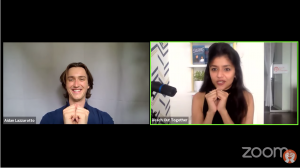 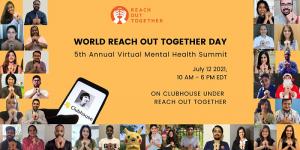 Through Toronto-based not-for-profit Reach Out Together, young professionals are sharing what family trauma & family support means for mental health maintenance

Reach out for help! If anyone thinks less of you for it, then it doesn’t matter what they think.”
— Huldah Sheena

TORONTO, ONTARIO, CANADA, June 30, 2021 /EINPresswire.com/ — Attendees of World Reach Out Together Day 2020’s Global Virtual Conference last July 12 will remember Cathleen Elle as a panelist from Charlotte, North Carolina, who shared her journey of recovery in the wake of her son’s passing away to suicide.

Elle is an international bestselling author, Transformational Speaker, Intuitive Coach & “Master Healer”. She is certified in R.I.M., or Regenerating Images in Memory, a therapeutic technique for trauma recovery.

“RIM was the actual tool that really helped me step into my journey, three years ago,” Elle says, describing it as “a healing modality that I use to facilitate you through your emotions.”

“We are able to locate, in your body, where you are holding that emotion…to go into your story and see it from a higher perspective.”

Joining Aanchal Vash for an interview this month as part of Toronto-based not-for-profit Reach Out Together’s weekly Mental Health Impact Series, Elle looks further back, to when she was a child. She recalls hiding, with her mother, from her alcoholic father, and how her mother urged the police not to take him away. She describes how at the time she felt “unlovable” and “unworthy”.

Elle says healing was not a linear process, but she pressed forward. “Through these healing modalities, I was able to go back into that scene and see it from a different perspective,” she says, noting that she now understands her mother’s motive as not wanting to lose her children.

This message is captured in Shattered Dreams, one of three books Elle published in 2020, which she describes as “a little self-help, a little memoir and a little inspiration.”

The book is available on Amazon, and through Audible as an audiobook read by Elle.

Sheena’s lesson for parents is on “the beauty of extending grace.”

She defines grace as “a free or unmerited forgiveness or favour extended to someone.”

In making the decision to adapt to being a stay-at-home mom, Sheena says she knew it was what she wanted and she embraced the challenges.

While she has found a steady routine, one of the challenges has been with addressing how others have reacted. She recalls comments that she was wasting her degree, or similar judgments.

“I’ve learned [that] for the betterment of our mental well-being, we need to look past comments and extend grace to people,” Sheena says.

She adds that who we choose to respond to and what we spend time thinking about comes down to one thing: priorities. Sheena’s key advice for new moms is to set priorities. This might mean writing down values and life goals. Crucially in her experience, it means building the right support network.

Urging other stay-at-home moms to let go of grudges and resentment, she says ‘unmerited forgiveness’ enables us to avoid dwelling, to keep going and to not be afraid to seek help in the right places.

“Reach out for help! If anyone thinks less of you for it, then it doesn’t matter what they think.”

Dr. Yasmine Saad is a New York City-based Clinical Psychologist and author of two books, Ignite Possibilities and Because You Matter: Personal & Professional Stories of Healthcare Warriors During COVID-19. She joins Aanchal Vash in the Mental Health Impact Series and begins with a direct message for the audience: “Follow your passions.”

Originally prepared to go to business school, Dr. Saad came to realize she had other ideas.

“It doesn’t fill my heart. It doesn’t bring impact,” she recalls thinking. With her parents’ support, she switched her focus to studying to become a psychologist.

Speaking of mental health and mental illness as a continuum, Dr. Saad says “I believe everybody is on a journey for growth, and growth comes with obstacles.”

Dr. Saad says the key to overcoming those obstacles to healing and growth is to “Pay attention to where your focus goes!”

Part of becoming what Dr. Saad calls “an expert at decoding our mind and body,” which are unavoidably linked, means finding balance.

This, she says, means recognizing when accumulated emotions manifest as mental illness. By being aware of that fluidity of our mental state, we can know when to take action and what we might need.

Dr. Saad encourages seeking support. “Inner peace is very hard to achieve by yourself,” she says, noting that we can all benefit from therapy, but people especially sensitive to their surroundings can uniquely benefit.

Toronto-based Transformative Coach & writer Aidan Lazzarotto, joining Aanchal to discuss Men’s Health Week and “The Power of a Quiet Mind”, says he’s often asked his preference between professional help and self-help. “I’m a big advocate of both,” he says.

Speaking specifically about gendered stigma men can face for seeking help, Lazzarotto says it’s important to speak to them “in their language”, recognizing unspoken signs in body language and energy levels.

Lazzarotto notes influences on his personal development including Brian Tracy’s “The Power of Positive Thinking” and the work of Jack Canfield.

Beyond that, he draws inspiration from his late grandmother for a “spirit of genuine care”, and from life lessons learned in his estrangement from his father, who recently passed away.

Much of Lazzarotto’s advice focuses on self-care practices such as meditation and writing, but as a coach, he is an eager guide to others.

Along with Cathleen Elle and several others, Lazzarotto will be involved in World Reach Out Together Day, a day of mental health advocacy in memoriam to founder Aanchal Vash’s late twin brother Tushar. The eight-hour event will feature four panels, four performances and four healing sessions.

Free tickets, and a purchasable VIP option, are both available through EventBrite until July 12.