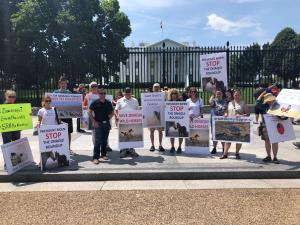 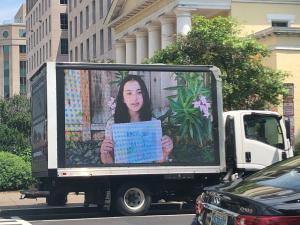 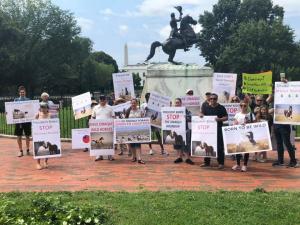 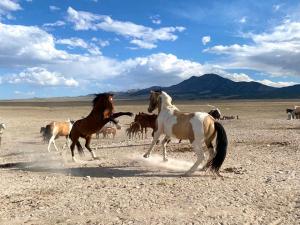 Film by Director of Disney’s “Black Beauty,” Along with Rally Led by Top Lobbyist are the Last Hope for the Onaqui horses Set to be Rounded Up by Helicopter

We are so grateful for all who attended today’s rally in support of our iconic American wild horses and burros whose backs our civilization was built upon.”
— Marty Irby, executive director at Animal Wellness Action

WASHINGTON, DC, USA, July 9, 2021 /EINPresswire.com/ — Today, Animal Wellness Action held a “Wild Horse and Burro Freedom Rally” in front of the White House following yesterday’s release of a short film produced by Ashley Avis, the director of Disney’s 2020 film “Black Beauty,” urgently pleading with President Joe Biden to intercede and stop the cruel helicopter roundup of the popular and beloved Onaqui wild horse herd in western Utah. The campaign is designed to raise public awareness of the plight of the wild horses President Biden’s Bureau of Land Management is set to roundup and incarcerate next week. Photos of today’s event can be found here, and videos here, and here. In addition, an electronic billboard truck displaying the short film aimed at Biden circled the White House and National Mall most of the day.

The Washington, D.C. event follows a rally the groups held with actress Katherine Heigl, the Jason Debus Heigl Foundation, the Cloud Foundation, and Red Bird’s Trust, on the steps of the Utah state capitol in Salt Lake City, Utah last Friday. Following the rally, leaders from the event traveled to the Great Basin Desert west of Salt Lake City, home to the Onaqui horses, and there documented with photos and video the healthy condition of the horses and the abundant forage, contradicting the Bureau of Land Management’s false narrative that the horses are overpopulated, starving, and destroying the vast Onaqui range.

“President Biden can either go down in history as the man who saved the Onaqui or the man who let them be rounded up by helicopter chase, purged from their home, and doomed them with a one-way ticket to slaughter in Mexico or Canada,” said Marty Irby, executive director at Animal Wellness Action, and one of The Hill’s Top Lobbyists for 2019 and 2020, who was recently honored by Her Majesty, Queen Elizabeth, II for his work to protect horses. “We are so grateful for all who attended today’s rally in support of our iconic American wild horses and burros whose backs our civilization was built upon.”

“This is our last chance to save these iconic horses,” said Ashley Avis, director of Disney’s Black Beauty film and president of The Wild Beauty Foundation. “The Onaqui are arguably the most famous herd in the entire country. If you have children, or a family, and you want to see wild horses in the wild— you may likely go here. But if something isn’t done now, instead of wild horses— living symbols of freedom galloping across the plains— we will see livestock in their place. Wild horses cannot be lost to history. Please, President Biden, intercede.”

“With thousands upon thousands of calls and emails to the BLM, Congress, and President Biden, the American people have spoken overwhelmingly in support of the federally-protected Onaqui horses,” said Scott Beckstead, director of campaigns for the Center for A Humane Economy who traveled from Sutherlin, OR to speak at today’s rally. “In its arrogance, the BLM has thus far ignored the public’s will and instead is bent on appeasing commercial livestock grazers. It will fall upon our president to step in and do the right thing to protect these American icons, but he must do so quickly before the helicopters take to the desert sky.”

“It’s time for President Joe Biden to face the voting public and explain why his Administration continues to stonewall the American people on wild horse protection,” said Cameron Ring, president of Andromeda Pictures who traveled from Atlanta, GA to speak at today’s rally. “The Onaqui wild horses in Utah are a national treasure that must saved.”

Descended from horses used by pioneers and native tribes in the late 1800’s, the Onaqui horses are known for their robust beauty and their ability to thrive in the harsh environment of the Great Basin Desert of western Utah. They are a favorite among wild horse photographers and enthusiasts and are believed to be the most popular and photographed wild herd in the country. Tourists from all over the country, and even the world, travel to Utah to view and photograph their favorite animals, including stallions with names like Charger, Goliath, Buck, Moondrinker, with glimpses of the herd’s elder statesman, Gandalf (also known as “Old Man” by some), being the most coveted prize.

But the Onaqui horses are facing a grim future. On July 12, the BLM will use helicopters to chase, trap, and remove most of them from their home range on Utah’s Great Basin Desert. Helicopter roundups of wild horses are notorious for their cruelty and the suffering they inflict on the animals. Horses will be chased for miles in the summer heat to the point of utter exhaustion, and some will sustain injuries or even be killed. There are new foals and elderly horses in the herd who will be in jeopardy of being left behind, wounded, or even killed during the terror, chaos, and confusion of the stampede into the traps. From there the horses will lose the two things that mean the most to them – their families and their freedom. They will be shipped by truck to BLM corrals where they will languish in barren feedlot conditions, awaiting an uncertain future. After being sorted and separated, the BLM will offer the animals for adoption, a process that poses a grave threat to their lives, as it has been recently reported that the BLM’s wild horse and burro adoption program is sending horses to their deaths in foreign slaughter plants.

The BLM claims there is insufficient forage for the horses on their HMA, yet the agency has allocated wild horses only between 9 and 15 percent of the resources on public lands, while livestock are allocated between 85 and 91 percent. Livestock greatly outnumber the horses currently on the HMA, yet the agency has announced no plans to reduce or eliminate private grazing, and continues to follow the direction of a diabolical plan misleadingly deemed the “Path Forward,” that calls for the roundup and eradication of tens of thousands of wild horses and burros on federal lands at a cost of up to $5 billion to the American tax-payer, according to the most recent Acting Director of the BLM.

The roundups are also planned for tens of thousands of wild horse and burro herds across the western United States, as the BLM heeds the wishes of the livestock industry and scrambles to remove as many wild equines as possible. Unless that is, they are stopped.

In April, a coalition of more than 70 groups sent a letter to Secretary Haaland calling for a freeze on grazing permits and an elimination of livestock grazing on all wild horse and burro Herd Management Areas. There has been no response from Haaland despite the media contacting the Secretary’s Office and the White House, who declined to comment.

The lack of response from the Biden Administration, combined with Haaland’s testimony before the House Appropriations Committee on April 20th that the Dept. of Interior is “in agreement with the plan of the previous Administration,” prompted a second letter in May directly to the President himself. Signed by more than 90 groups, rescues, and businesses, and more than 1,100 individuals, the letter called for Biden to immediately place a moratorium on the mass helicopter roundups. There has since been no response from the White House.

Visit the campaign website at www.SaveTheOnaqui.org for more details on the rally.

The Wild Beauty Foundation is dedicated to protecting the horses of our time, by bringing unique awareness to the key issues both wild and domestic horses are facing today. WBF seeks to illuminate the antiquated nature of devastating wild horse roundups, the existence of mass holding facilities, the reality of slaughter, and the heartbreaking seperation of bonded equine families. Our platform is devoted to including advocates of all ages through strong, powerful, and elegant messaging. We feel strongly that the voices of tomorrow are essential to leaving a legacy for the horses of today. Through our unique entertainment platform, WBF will launch educational programs for children, create film series, provide grants, conduct Ambassador Horse “meet and greets,” as well as perform “boots on the ground” rescues of horses in need. Every life matters.