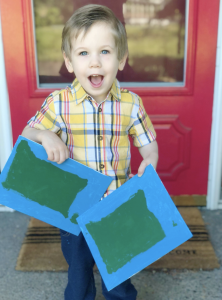 This week Mensa made history inducting its youngest member with the highest IQ. Meet Lawson Lundberg, a flaxen-haired toddler with a 151 IQ.

This week Mensa made history inducting its youngest member with the highest IQ. Meet Lawson Lundberg, a flaxen-haired toddler with a 151 IQ. Lawson is already using his considerable talents as a painter to help his fellow man, selling his artwork to benefit the March of Dimes. The pint-sized prodigy, once born a preemie, now boasts an IQ over 50 points higher than the average American. Lawson’s amazing mental prowess became clear at the tender age of 18 months when he began identifying countries and states at an astonishing rate. At only seven months old Lawson could identify colors, and by two years old he could identify every flag, country, and capitol in the world. While other kids were learning to walk, Lawson was naming all 50 states and 195 countries!

You can find Mensa members in diverse fields including engineers, scientists, and even actresses, but this blue-eyed little guy expresses his genius through watercolors. He paints the exact shape of countries by memory and all to support the March of Dimes in their efforts to eradicate childhood disease. His amazing talent has already raised $500, and 100% of the proceeds go to the organization. The mission of this tiny tyke is to help ailing children in hospitals all over the region.

Lawson proudly displays his Mensa card as he joins the ranks of great minds like noted inventor Sir Clive Sinclair, actress Geena Davis, and his mom Sara Lundberg. Though proudly he tops his moms 135 IQ by 16 points. Mensa members score in the top two percent of the general population on an approved intelligence test, and some scientists are still searching for the “genius gene,” but whether it results from nurture or nature, Lawson is a talented boy. The prestigious organization “is a diverse and colorful community, with members from all walks of life, many of whom make significant contributions to the community.” Lawson Lundberg has a head start on his colleagues, for at only 24 months he is already contributing his considerable gift to society.

According to his mother Sara, Lawson is an exceptional child in every way, including being a big brother to his three siblings. Lawson is no stranger to physical challenges, including delayed speech. In fact, he did not speak a word until his second birthday when to his parent’s amazement he blurted out the whole alphabet. Having spent his early days in the NICU where doctors monitored every organ, Lawson understands the weight a lengthy hospital stay can take on families, that is why his proceeds benefit the March of Dimes. The non-profit, which was founded by President Roosevelt nearly 75 years ago, is staying true to its core value of helping mothers with disease-stricken children. Lawson is taking up this cause to champion the well-being of little ones just like him.

While there are only 145,000 Mensa members spanning 100 countries, Portland now has bragging rights — calling their native son the youngest and brightest Mensa member in the world.

For more information about little Lawson, or to interview him, please contact Sara Lundberg at 323-702-5621 or saralundberg10@gmail.com.