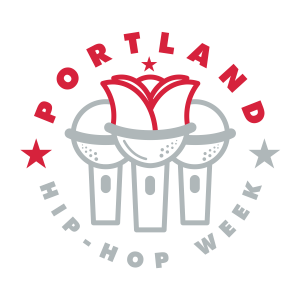 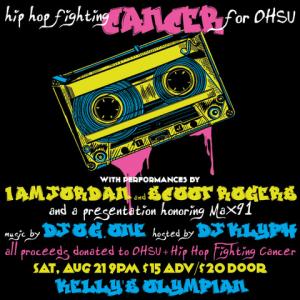 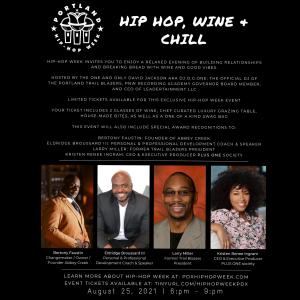 Hip Hop represents a voice for people who don’t necessarily have a voice.”
— David Jackson, co-founder

PORTLAND, OR, UNITED STATES, July 14, 2021 /EINPresswire.com/ — In the wake of the pandemic and a year of protests the city of Portland begins to heal and one Hip Hop celebration is leading the way. The annual Hip Hop Week is the first of its kind for Stumptown where visitors expect lush, forested parks and the largest concentration of pinball arcades in the world. Now city leaders are leaning into the future of the Pacific Northwest town bringing artists to the forefront of the growing Hip Hop scene to collaborate on a way to incorporate the culture into the mainstream. In a town where Black residents are twice as likely to be stopped and searched as their white counterparts something needed to be done to bring unity.

In 2015 as an olive branch from the city, then-mayor Charles Hales opened Hip Hop Day as a sign of inclusion in the Portland community. Over the years the open dialogue continued and as a result of these talks the annual Hip Hop Week was born. The brainchild of founders Idris “Starchile” O’Farrell & O.G.ONE, Portland’s Hip Hop Week is now celebrated annually from August 20-26.

Founders Idris “Starchile” O’Farrell & David “DJ O.G ONE” Jackson worked tirelessly to shed light on the concerns of the Hip Hop community while addressing the apprehensions of the establishment. After years of working with city officials, Jackson sees the fruit of their labor. According to the CEO of Leadertainment, it appeared as though OLCC, Fire Marshall’s, and law enforcement engaged in what was perceived as a “systematic shutdown of clubs and venues that were primarily occupied by people of color.” Some following the happenings in Portland saw this egregious move as an all-out assault against the Hip Hop community and as tensions began to flare on both sides O’Farrell and Jackson stepped up to bring peace and bridge the gap.

Jackson and O’Farrell educated officials who did not understand that the music and culture of “Hip Hop represents a voice for people who don’t necessarily have a voice.” The progress made on both sides of the issue is a testament to the progression of race relations in this country. According to Jackson the whole aim of this coveted week is “To highlight and strengthen the rich culture of hip hop through entertainment, education, and community-building events that celebrate, uplift, and elevate the culture.”

The festivities kick off with Mic Check a Hip Hop Showcase on August 20th with Jabee (OKC) and Kunu (PDX) at Lola’s Room at the Crystal Ballroom. The event continues with Hip Hop Fighting Cancer, to bring awareness and to honor survivors and those who have lost the battle with cancer within the Hip Hop community, such as Idris “Starchile” O’Farrell. Attendees will hear music by IamJordan and Scooter Rogers at Kelly’s Olympian followed by highlights like August 24th – DJ O.G.ONE’s Official “Legacy” & “Rise of the Rose” Mixtape Album release party. The week rounds out with social networking on August 25th at the Hip Hop, Wine & Chill event which will honor and highlight business execs Larry Miller (Brand Jordan Board Chairman), Bertony Faustin (Abbey Creek Hip Hop Winery Owner), and Kristen Renee Ingram (CEO & Executive Producer for PLUS ONE society and closes with the Star Awards. The Star awards ceremony highlights the men and women of Hip Hop who have paved the way for the current and next generation of creatives in Hip Hop. The Star awards recognize individuals who have uplifted the community through advocacy, social justice reform efforts, music, art, and philanthropy.

The organizers hope that participants in the Hip Hop week will gain a greater appreciation for the rich culture.

For more information about Hip Hop Week or to interview David “DJ O.G. ONE” Jackson contact him at 503 303-8443 or pdxhiphopday@gmail.com.