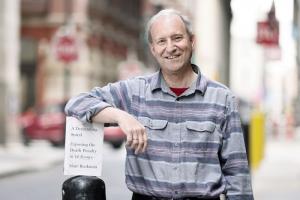 “A Descending Spiral: Exposing the Death Penalty in 12 Essays” Exposes the Fatal Flaws of Capital Punishment

When you work closely in the system from the defense side, you see how outrageous the death penalty is.”
— Marc Bookman, author

PHILADELPHIA, PA, UNITED STATES, May 26, 2021 /EINPresswire.com/ — Marc Bookman, co-founder of the Philadelphia-based Atlantic Center for Capital Representation and a well-established writer, wrote “A Descending Spiral: Exposing the Death Penalty in 12 Essays” with a singular purpose: Awaken the public to a death penalty justice system he deems as broken, capricious and simply unfair.

The veteran capital defense lawyer describes a dozen harrowing cases, as he condemns capital punishment in America in a devastatingly clear and informative manner. The series of cases compiled by Bookman over the past 30 years highlights a broken legal system and exposes the dark side of the death penalty system and the fatal misconceptions that underpin its logic.

“When you work closely in the system from the defense side, you see how outrageous the death penalty is,” said Bookman in a recent interview.

“There’s a reason the prosecution tries to limit how much the jury knows about the person who is accused, because if the jury spent 30 minutes just talking to the guy — whether he is severely mentally ill, low functioning, or just did an absolutely terrible thing — the jury would never vote to execute him. The jurors would immediately see the humanity in the person, however that manifested itself.”

In a review of the book, international criminal defense attorney Michael G. Karnavas said, “What makes this book interesting and well worth reading is that in these 12 essays, you are exposed to all that is wrong with the death penalty and why it needs to be abolished. Even if you think you know all there is to know about the death penalty, ‘A Descending Spiral’ will not fail to inform. He [Bookman] comes with vast experience, appreciating the hidden nooks and crannies of this highly complex field, from the front line of the trial courts to the appellate courts, where so much of the legal life-saving maneuvering takes place. “Bookman lets the facts breathe, without forcing a message or aiming for heavy-handed persuasion.”

Before his current role as the executive director of the Atlantic Center for Capital Representation — a nonprofit that provides services for those facing possible execution — Marc Bookman spent many years in the Homicide Unit of the Defender Association of Philadelphia.

The U.S. ranks sixth in state-sanctioned killings, behind China, Iran, Egypt, Iraq and Saudi Arabia. “For us to be in that company,” Bookman says, “is an international embarrassment.”

“A Descending Spiral” is available at https://bit.ly/3fJCqUZ.
###