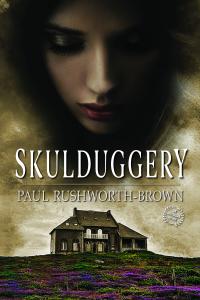 “Skulduggery is a historical fiction novel based on my family’s known beginning, complete with mystery, romance, twists and turns and a whodunnit.”

Rushworth-Brown’s book series, SKULDUGGERY, explores the fictional life of a peasant family in Yorkshire, England as they traverse through important eras of English history.

The first book, Skulduggery, explores Yorkshire at the turn of the 17th century [following the death of Queen Elizabeth I], while the second, Winter of Red [yet to be published] is set during the English Civil War.

A third book, Dream of Courage, is currently in the works.

He said the concept for the series was born in 2015 out of an investigation into his family history, which dates back to the small town of Haworth, Yorkshire in 1590.

“My father never knew anything about his family history, so I spent six months investigating my past to have something to pass on to my children,” Rushworth-Brown said.

“Skulduggery is a historical fiction novel based on my family’s known beginning, complete with mystery, romance, twists and turns and a whodunnit.”

The story, set on the Moors of West Yorkshire, follows wee Thomas and his family shortly after losing his father to consumption. Times were tough in 1603 and there were shenanigans and skulduggery committed by locals and outsiders alike. At a time when life expectancy was thirty-five, children rarely lived past the age of six and ale was consumed liberally because the water was undrinkable.

Since the release of Skulduggery in 2019, the book has received rave reviews overseas with one reader describing it as “A fascinating and wonderful example of historical fiction and the old-time romance and whodunnit really added to the story. Thoroughly researched, it is written in such a way that puts you in the time and place.”

Paul Rushworth-Brown has featured on America Tonight with Kate Delaney, Radio 2RDJ-FM and the BBC’s Sanchez Payne who described the story as ‘epic’.

Rushworth-Brown hopes the series will help shed some light on 17th century England, which he feels is an often misunderstood period of history.

“The history of these people is rarely thought of and even less rarely written about because there are few records as most would have been illiterate. There is much written about the lords and ladies but what about the common people.”

“Having the ability to research and describe what life may have been like gives my readers the ability to step back in time. It was important for me to describe in detail the day-to-day hardships and adventures and not sanitise the story for the modern literary world.”

“England was essentially a third-world country during this period, and most were illiterate, so it took tremendous effort to research how people lived,” he said.

“The writing pulls no punches, it was a rough period in English history.”