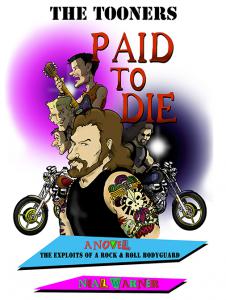 Paid To Die Novel – The Exploits Of A Rock & Roll Bodyguard 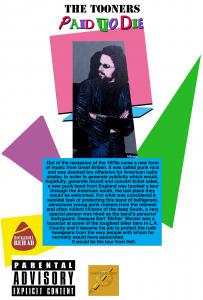 Dwayne Warner, a bouncer in some of the toughest biker bars in Los Angeles County

On May 30, Paid To Die, the Rock & Roll Bodyguard novel, along with the release of the single Paid To Die, by The Tooners will be released for the first time.

The book reads like a premium cable TV mini-series and The Tooners’ song is a good theme song for it.”
— The Rock & Roll Rehab Blog

LOS ANGELES, CALIFORNIA, USA, May 30, 2021 /EINPresswire.com/ — In 1978 a new style of music came to America from England. It was rude, obnoxious, and confrontational and the band spearheading this new British Invasion was set to tour the South, the least likely place they’d be welcomed. Anticipating a violent backlash to this coming culture clash, the band’s record label needed to hire a security team that could handle any situation that may arise. The man they chose for the job was Dwayne Warner, a bouncer in some of the toughest biker bars in Los Angeles County.

For twenty years after that historic tour, Dwayne’s brother, Neal Warner, co-founder of the L.A. multi-media band The Tooners, insisted Dwayne’s ever-expanding and exaggerated stories of life on the road needed to be recorded for posterity. But being a biker, the idea of being perceived as a “rat” was unacceptable and as a professional bodyguard who worked with bands such as Steppenwolf and Van Halen, telling tales about his employers was unprofessional so he adamantly refused to write about his experiences.

Neal, a professional cartoonist and writer, decided an acceptable alternative could be to write Dwayne’s stories in the form of a novel. Names, except for Dwayne’s, would be changed and the “facts” of what happened on the tour would be buried under a mountain of action-adventure movie-style scenes. Dwayne had imagined his memoir being titled Paid To Die and Neal’s band, The Tooners, had already recorded a CD (Rocktasia) which included the theme song to Paid To Die so that was chosen as the novel’s title.

The novel was written in 1999 and was intended to be an elaborate joke for Dwayne’s eyes only. Stories of experiences shared by the brothers were included in the book knowing that Dwayne would recognize, and hopefully appreciate, this very personal novel which included a lot of something the two brothers had in common; a very sick and twisted sense of humor. However, the joke was ultimately on Neal, the author, when his brother refused to read the novel citing plausible deniability fearing those caricatured in the book might recognize themselves and sue. The joke fell flat and was locked away on a hard drive for another 22 years.

Sometime in the year 2020, fourteen years after the sudden death of Dwayne Warner at age fifty, Neal Warner was self-quarantining in his home when he realized that if he were to die from the Cornonavirus pandemic, his finished novel, Paid To Die, the story about his only brother, would die with him. And so, on May 30, 2021, the 65th birthday of the late Dwayne Earl Warner, a limited edition printing of the novel Paid To Die along with a release of the single Paid To Die from the album Rocktasia by The Tooners will be made available for the first time.