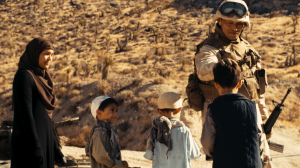 Inspired by true events. The battle begins when soldiers get home.

HOLLYWOOD, CALIFORNIA, UNITED STATES, May 28, 2021 /EINPresswire.com/ — Sam Medina’s distinct charisma makes him an avatar of intrigue, known for blockbusters like Venom, Alita Battle Angel, making the mission impossible for Mark Wahlberg in Mile 22 or taking Hugh Jackman through his mind in the upcoming film Reminiscence due out this August 2021.

Sam Medina’s acting work has made mighty marks in the Film Industry for more than 15 years. Honored to work with legendary directors, Sam slowly began to direct and write his own vital venture inspired by his wife, actress, and producer Carla J. Seneca.

Produced by Carla J. Seneca and Sam Medina’s Overlook Entertainment and Michael Halverson’s G.T. Productions, the story centers around a young Afghanistan war Marine who struggles with assistance while valiantly striving to overcome the statistics of 22 veterans who commit suicide daily. His hopes were cut short after a tragic event occurred while performing his duty in Afghanistan, leaving him bound to a wheelchair. This film follows the difficult adjustment of what happens to a disabled soldier after being discharged from the military.

Although awareness is critical, Medina believes in the power of story and how we all need to be proactive in the fight against Veteran PTSD.

22-The Unforgotten Soldier is financed by private investors and backers who donated to the film’s CrowdRise campaign who faithfully believe in the movie’s message.

Overlook Entertainment is a minority and a veteran-owned corporation that values films with unforgettable stories and great cinematic structure. President Carla J. Seneca and Vice-President Sam Medina write scripts, develop and produce movies, T.V. shows, and documentaries. A creatively inclined couple, both ethnically ambiguous, they work with diversity and inclusionary artists and crew, including those with disabilities. They created Overlook Entertainment not to be Overlooked.

Statement from Joyce Rivera on the Passing and Determination of Death of Actor Michael K. Williams