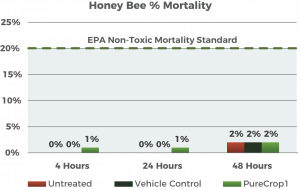 Results were evaluated by comparing mortality between the treated and untreated control groups.

Plant-Based PureCrop1 Gives Bees & Farmers a Chance to Grow Together

PureCrop1 is considered to be greater than the nominal dose of 25 μg a.i./bee and was non-toxic when administered by contact to adult honey bees”
— Cole Younger, PhD Study Director Entomologist, STILLMEADOW, Inc.

STILLMEADOW, Inc., a research facility specializing in environmental toxicology, animal health, and entomology, evaluated the effects of PureCrop1 on honey bees. The objective of this study was to assess the acute contact toxicity potential of the tested substance, PureCrop1, when administered topically to adult worker honey bees following the Environmental Protection Agency Office of Chemical Safety and Pollution Prevention Guidelines. The study director concluded, “PureCrop1 is considered to be greater than the nominal dose of 25 μg a.i./bee and was non-toxic when administered by contact to adult honey bees.” In other words, PureCrop1 was tested at six times over the suggested dilution rate and prove non-toxic to bees.

The agriculture industry is dependent on bees and other pollinators to grow crops, yet bee populations worldwide are in decline. PureCrop1 strives to do its part to help this reduction by providing an alternative solution in agriculture that protects honey bees while protecting crops. Organic, OMRI-listed, and derived from seven plant-based ingredients, PureCrop1 protects biological inputs and provides a better ecosystem for bees, plants, and the farmers who raise them. The bio-selective colloidal micelle at the base of the formula allows for a unique mode of action and surfactant properties that increase the efficacy of any other product mixed with it. The first of its kind, PureCrop1 uses nano-scale particles to naturally target and eliminate sap-sucking insects, harmful mold, mildew, and increase yields with bio-stimulant properties, while being friendly to people, pets, pollinators, and the planet when used as directed.

Figure 1: Results were evaluated by comparing mortality between the treated and untreated control groups.
PureCrop1’s origin began in the ’80s in Hawaii; two scientists studying cancer research believed the nano molecule could combat human cancer. The cancer research continues, but about fourteen years ago, a shift to agriculture was made and led to this particularly unique colloidal micelle that comprises the base of PureCrop1 and is used in the field today. PureCrop1 is available through agriculture and hydroponic distributors in most U.S. states, with more states pending. International, PureCrop1 is now available in Australia and New Zealand. Home growers and gardeners can find PureCrop1’s Ready-To-Use Kit on Amazon. To access the complete study and view more trials visit PureCrop1’s website studies section.

PureCrop1 is an organic all-in-one insecticide, fungicide, bio-stimulant and surfactant agricultural formula used by both organic and conventional farmers on all crops. PureCrop1 is OMRI-listed, ASCO approved and FIFRA 25(b) exempt. Our mission at PureCrop1: Realizing the full potential of the future of agriculture – bridging traditional practices and innovative technologies, advancing the viability of sustainability.