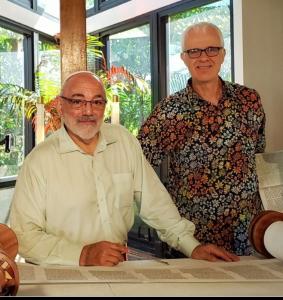 As we help the community repair and release during extraordinary times, we will meet to rekindle hope, reconnect with loved ones, and reaffirm a higher purpose.”
— Carol W. Pescaia, JCK Board President

KAUAI, HAWAII, UNITED STATES, August 31, 2021 /EINPresswire.com/ — The Jewish Community of Kauai, a member of the Union for Reform Judaism, will Zoom its services for Rosh Hashanah and Yom Kippur for the first time. All are invited to participate in its contemporary yet traditional worship that is spiritually focused. Services are engaging for Hebrew and non-Hebrew readers seeking a Jewish connection.

Two distinctive rabbis have partnered again this year, sharing their vision of peace. They meet on Kauai, the farthest domestic point from the US mainland, and the last time zone on earth to celebrate the annual High Holy Days. The rabbis will be joined by other talented participants, JCK members, and guests on the Bimah as the community joins together in co-creation at this most sacred time.

Rabbi Aryeh Azriel is a Jewish thought leader and creator of the Tri-Faith Initiative in Omaha, NE, a globally unique project that co-locates a synagogue, church, and mosque together on one campus with a common desire to foster mutual understanding, respect, and friendship. Rabbi Aryeh was the senior rabbi at Temple Israel, Omaha, from 1988-2016. Born and raised in Tel Aviv, he received his ordination, M.A. in Hebrew Letters, and his Doctor of Divinity from Hebrew Union College. Rabbi Aryeh was the recipient of the Otto Swanson Spirit of Service Award in 1993, and in 1997 received the Martin Luther King, Jr. – Living the Dream Award, recognizing his continuing work on building cooperation with projects such as the Mitzvah Garden, Black/Jewish Dialogue, and Habitat for Humanity. In 2019 he was among the six Tri-Faith leaders who accepted the Maurice N. Eisendrath Bearer of Light, Union for Reform Judaism award, the highest honor given by the URJ. Rabbi Aryeh is found online at https://facebook.com/aryehazriel.

Kauai Rabbi Rob Kvidt was ordained in the Kabbalistic tradition of spiritual Judaism at Rabbinical Seminary International in 2019. Kauai now has its own progressive rabbi who conducts services, teachings, and Jewish ceremonies including weddings for residents and visitors. It is the first time Kauai has had a Reform Rabbi living full-time on the island. Known as the “Kauai Rabbi,” Rabbi Rob also welcomes and serves interfaith and LGBTQ communities. His range of Judaic expression includes both the Reform and Conservative Jewish movements. Rabbi Rob is a certification candidate at the Gamliel Institute specializing in Jewish end-of-life rituals and is on the board of the Interfaith Roundtable of Kauai. His mentors include Rabbi Bill Kurry ZT”L and Rabbi Aryeh Azriel. Rabbi Rob is found online at https://kauairabbi.com.

Inspired by some of the most ancient traditions, Jews are called to assemble as a united and welcoming community, to help bring their shared commitment to a world made better through equality, dignity, peace, and love. It is said there is no better place on earth to enrich the soul than in the spiritual paradise of Kauai.

“On 5782 we gather together to Praise God – by which we do not flatter the divinity of the universe, but discipline ourselves to be part of it – doing what we can do bravely.” — Omaha Rabbi Aryeh Azriel.

“This is the final year in a 7-year agricultural cycle according to the Torah that remains honored in contemporary Judaism,” said Kauai Rabbi Rob Kvidt. “5782 is a Shmita or sabbatical year which literally is defined as “Release.” This is the time we release and reset our lives with a focus on our shared earthly home, and on Godly intentions”.

The Mishkan HaNefesh flipbook Machzor is available at no cost courtesy of CCAR so that you can follow along: It is found here: