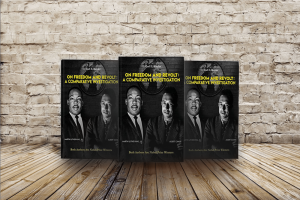 Neither man was willing to stand in the presence of tyranny, oppression, racism, exploitation, murder, war and do nothing

Structured similar to a dissertation, the book outlines the commonalities between the two nobel
laureates as they are divided between geographical and temporal factors.”
— Carl E. Moyler

PITTSBURG, CA, USA, September 29, 2021 /EINPresswire.com/ — Carl E. Moyler’s On Freedom and Revolt: A Comparative Investigation is an academic work that details a comparative analysis on the lives of the American social activist Martin Luther King Jr. and French existentialist philosopher Albert Camus. Published by ReadersMagnet, the book offers a synthesis between the collectivist character of King’s revolution for equal rights and the individualist nature of Camus’ rebellion against nihilism.

Structured similar to a dissertation, the book outlines the commonalities between the two nobel laureates as they are divided between geographical and temporal factors. Martin Luther King’s life is examined mostly through his letters and speeches and Albert Camus via his novels and philosophical writings. Both men lived and witnessed the ravages brought about by the social and political hegemonic structures of their respective time and place; the ouvres of King and Camus are linked together by the concepts of revolt and freedom. The author believes that their combined message contains implications and directions that will provide the foundation for plans of action that will inspire the necessary morality to combat social and political antagonisms.

The author writes, “This book is dedicated to all those heroes and heroines who have seen and will see life as a daring adventure to be given in the name of service to humanity, to justice and to freedom.” The book is the author’s contribution to the never ending quest for a more just, humane and rational world.

Authors Press is an online publishing company and book reseller catering to the needs of both experienced and aspiring authors as well as readers. They offer the best publishing solutions for full-time and independent authors. The company’s team of proofreaders, editors, designers, and publishing professionals are committed to achieve industry standards for their client’s work to be published, marketed, and sold.