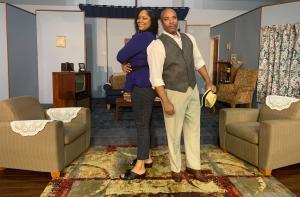 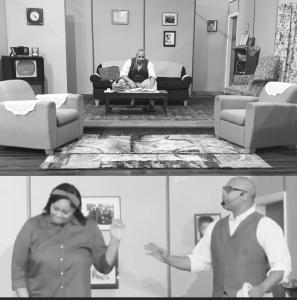 Southerngal Productions presented a heartfelt stage play titled “Blu Comes Home”. This dramatic production was written, produced and directed by Roxanne Reid. Blu Comes Home is a heartfelt drama dealing with life in Macon GA in the 1950’s, when family, friends and loved ones are faced with pride, jealousy, deceit and racial tension. Blu’s trials and tribulations lead him to restore his life through his faith in God while incarcerated. “Jeremiah 30:17”

Emerging actor Cornelius Wyatt Jr, had another breakout performance playing the character role of “Clarence.” Clarence has always held a good job and made lots of money for a Negro male. He is well educated and he lives a very upscale life, never wanting for anything and married. He is a changed man now that he has matured and desperately would like to be a part of his son (Jason) life and has observed him from the sideline for many years. He feels bad for the situation with his son’s mother, Marie, played by actress Kaneya Morgan and wants to make things right with her for his son’s sake.

Clarence shows up at Marie’s home many years later. After treating her badly while she was pregnant and abandoning their relationship, he appears unexpectedly knocking at her door. Tension feels the air that matches Marie’s disbelief when she opens the door wanting to know what he is doing here. Clarence wants to desperately be a part of their son Jason’s life. He’s also been watching his son from the sidelines and wants to be able to help provide and support his education.

TESTIMONIALS
Benny Pope: “The character gripped the audience from the moment Wyatt entered the stage from the time he left because of the depth he brought to the role. He is a natural.”

Keyvin Jones: “Blu comes home was a great play about forgiveness and reconciliation that resonated deeply for me. In the role of Clarence, Neil did a phenomenal job of the absent father and his convincing performance stirred many emotions from the audience. Neil definitely put a lot of dedication into this role and I’m looking forward to his next performance.”

QUESTIONS?
Members of the media are invited to attend and can direct any inquiries to Taroue Brooks by emailing taroue.brooks@yahoo.com