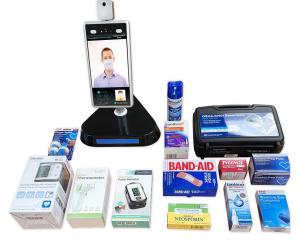 SAN DIEGO, CALIFORNIA, UNITED STATES, September 1, 2021 /EINPresswire.com/ — New Delta Variant business safety kit, to aid in preventing the spread of disease, has been developed by Sperry West in San Diego California. Known as ,“The American Safety Kit” (ASK), it contains most of the important items needed for serious disease prevention and safety. At the heart of Sperry West’s SW6150KIT is the TEMPCAM™, the full featured body temperature alerting camera/monitor.

The TEMPCAM uses a German made sensor for high accuracy temperature evaluation. A feature of the TEMPCAM is the ability to recognize & store more than 20,000 faces. Besides its internal recording ability, it can interface with network video recorders (NVR) & digital video recorders (DVR). It is supplied with a table-top stand & base, although it can also be wall mounted. The mount is universal, so it can interface with floor stands & tripods as well (not included).