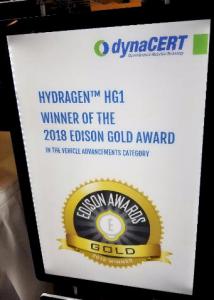 NEW YORK, NY, UNITED STATES, January 26, 2021 /EINPresswire.com/ — dynaCERT Inc. (TSX: DYA) (OTCQB: DYFSF) (Frankfurt: DMI) holds the world wide patents on the means and methods of monitoring and monetizing carbon credits within emission reductions in diesel engines, dynaCERT holds this in 12 different verticals. dynaCERT has this week received approval from VERRA of its concept submission and is proceeding to the next steps that will see carbon credits generated and tracked in order to be sold on the open market (see related January 25, 2021 news release entitled “dynaCERT Announces Major Carbon Credit Advancements with Verra”, additional follow-through details are expected near-term).

Voluntary Carbon Credit Market positions dynaCERT at the fore the coming government Mandatory and Incentive-Oriented Markets: The Verified Carbon Standard, Verra or VCS, formerly the Voluntary Carbon Standard, coordinates one of the largest voluntary carbon credit exchanges and is a standard for certifying carbon emissions reductions. Once dynaCERT’s arrangement with VERRA is developed and gains traction, it has serious potential to catapult dynaCERT toward becoming a multi-billion Fortune 500 company. dynaCERT is the only approved mechanism of its kind in the voluntary carbon credit market, and this puts dynaCERT center-stage for governments globally to adopt for much-needed home-grown jurisdictional carbon credit programs (incentive-oriented and mandatory).

dynaCERT’s concept Methodology has just been approved by VERRA, the Methodology uses dynaCERT’s patented HydraGEN™ Technology to lower carbon emissions and its HydraLytica™ Telematics technology to securely record carbon emissions and other non-personal data from diesel and gas engines. dynaCERT’s telematics developer invented Apple Pay™ and PayPal™ . Looking at the long-haul trucking market alone, each truck using dynaCERT’s tech can generate as much as $3,000 in carbon credits per annum. dynaCERT’s plan is once it is operational with the VERRA authority exchange, dynaCERT will maintain 50% of the carbon credit$ and 50% of it will go to the fleet owners. The market for this technology is enormous and not limited to transport trucks, look for dynaCERT to flourish as it further expands into mining, shipping, power generation, rail, and other sectors (dynaCERT has word-wide patents on 12 different verticals).

DYA.TO current market cap is UNDER C$300 million — could jump dramatically in very short order: Considering the importance of the patents dynaCERT possesses and the news this week of advancements with VERRA – the developments help put a target on dynaCERT for acquisition/buy-out. As the scenario for carbon credits develops, a market savvy cabal of talented individuals with insight (or coordination) of coming environmental regulatory pushes from governments (e.g. say with a new Biden administration in USA and/or insight on a coming EU push) will look at dynaCERT as an extremely lucrative target via either established entities or SPAC. A special purpose acquisition company (SPAC) is a “blank check” shell corporation designed to take companies public without going through the traditional IPO process, and SPAC’s are all the rage now — the targeting of dynaCERT via a SPAC now is very much increasing as a possibility. 237 SPACs have debuted on U.S. exchanges in 2020, raising $79 billion — it’s not a stretch to envision one being formed now specifically to buy-out dynaCERT in order to capitalize on the Carbon Credit Market potential.

dynaCERT Possesses Potential Trillion Dollar Carbon Credit Patent: In a recent year-end/new-year corporate interview, the CEO of dynaCERT disclosed the extreme level of latent potential poised to be realized — the CEO recounted an opinion expressed to him in the closing weeks of 2020 by a securities analyst; “that one worldwide patent you’ve got on the means and methods of monitoring and monetizing carbon credits within an internal combustion engine, that’s a trillion dollars in itself.” (See related interview URL link: https://www.newsfilecorp.com/release/71201 online).

Also of particular note recently is the addition of Harold Martin to the dynaCERT’s Advisory Board. Mr. Martin is a legend in the automotive industry, he is a former Automotive Engineer at General Motors who led numerous programmes and awarded 20 World Patents and 5 Classified Patents. He has been involved in numerous world-famous endeavors from being partner in Shelby vehicles design to the founding of Martin Industries in 1996 where he developed and sustained solid business partnerships within the Automotive, Aerospace, Defense and Motorsport industries and where he commissioned 15 global facilities reaching more than 1 million square feet in combined space. He led many joint global partnership agreements including Wiring JV, Smart Wiring JV and Casting JV. He is recognized by the OEM industry for engineering and manufacturing expertise, creativity, sense of urgency, and speed to market.

For further DD on dynaCERT Inc. and to better understand why Haywood Securities selected dynaCERT for its TOP PICKS 2021, visit the following URLs:

Content found herein (above) is for information purposes and is not a solicitation to buy or sell any of the securities mentioned. This release may contain forward-looking statements regarding future events that involve risk and uncertainties.

Veriff expands to Latin American market and partners with Kueski

Janer Gorohhov, Co-founder and CPO Veriff, a global identity verification provider is partnering with Kueski, one of the fastest-growing fintech platforms in Latin America. Having […]

The Scarcity Of Safe Water Drives The Water Purifiers Market

Ninety One CMO Malcolm Fried The chance to help a strong firm build a new brand across countries & continents is a rare privilege. I’m […]