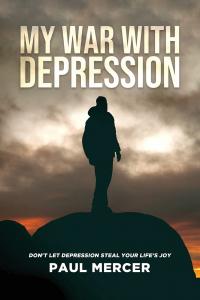 My War with Depression

If you know someone or you suffer with depression please read my book. Hopefully, it will help, because suffering with depression is a tragic life experience.”
— Paul Mercer

FLORIDA , UNITED STATES, October 18, 2021 /EINPresswire.com/ — According to the CDC, 1 out of 6 adults will have depression in their lives and the condition affects about 16 million American adults yearly. This is a major issue, one that author Paul Mercer knows well, having experienced depression when he was young. With the benefit of age and hindsight, he now shares his knowledge and wisdom, giving readers strategies to deal with depression in the hopes that “My War with Depression” will help them in their own struggles.

In “My War with Depression,” Mercer provides a general outline of the symptoms of depression. Then he shows readers how to alleviate these, based on his life experiences and learnings as he struggled to overcome depression and get better. This is not only based on personal experience but also drawn from the advice of doctors, which Mercer fine tuned as he applied them in his own life.

He also shares his own circumstances, namely how a promising future as a college graduate was nearly derailed due to the onset of depression. Mercer partly attributes this to contracting tetanus when he was younger, while he recovered from it he believes there were lingering effects on his nervous system that contributed to his later condition. Additionally, during those days treatment for depression was not as well developed, effective medication or even understanding of the condition had not yet been developed. Mercer had to search for doctors with the right knowledge and scour for information for himself. He realized that he was on his own, with no roadmap to follow, and had to devise ways to survive depression – or die trying.

Today depression remains a major problem even with improved understanding and treatment. The knowledge and experience Mercer gained helped him deal with his condition and live a full life, it was not an easy struggle but he made it.

Mercer’s advice is tried and tested, often through trial and error. He compiled the strategies and steps that worked best for him and now offers it to his readers so that they may use it to better their lives or pass it on to those they care about who are also dealing with the condition.

About the Author
Paul Mercer has been interviewed by Kate Delaney, which is viewable at BookTrail Agency.