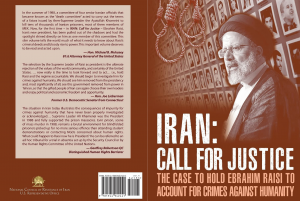 NCRI-US’s New Book, IRAN: Call for Justice, makes the case to bring Iranian regime’s president Ebrahim Raisi to justice. It establishes his role in the massacre of 30,000 political prisoners in 1988 and the killing of 1,500 protesters in 2019. 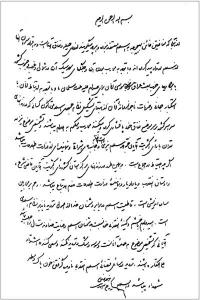 Iranian regime’s former Supreme Leader Ruhollah Khomeini’s evil fatwa which was the basis for the genocidal and swift massacre of over 30,000 political prisoners, primarily members of the main Iranian opposition, the People’s Mojahedin Organization of Iran (PMOI/MEK). 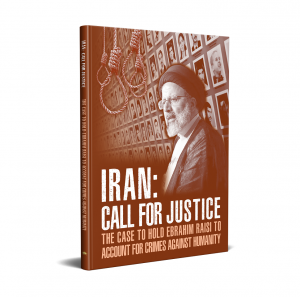 NCRI-US’s New Book, IRAN: Call for Justice, makes the case to bring Iranian regime’s president Ebrahim Raisi to justice. It establishes his role in the massacre of 30,000 political prisoners in 1988 and the killing of 1,500 protesters in 2019.

We should see Raisi removed from the presidency and, most significantly of all, see this government removed from power in Tehran, so that the gifted people of Iran can again choose their own leaders.”
— Hon. Joe Lieberman, former Senator from Connecticut

WASHINGTON, DC, UNITED STATES, September 18, 2021 /EINPresswire.com/ — The second edition of ‘IRAN: Call for Justice –The Case to Hold Ebrahim Raisi to Account for Crimes Against Humanity,’ by the U.S. Representative Office of the National Council of Resistance of Iran (NCRI-US), will be released on Tuesday, September 21, 2021, the day that the new president of the Iranian regime, Ebrahim Raisi, is scheduled to address the 76th session of the UN General Assembly. The book centers on establishing the role that Raisi has played in egregious human rights violations, primarily in the massacre of thousands of political prisoners in 1988, and the killing of 1,500 protesters in November 2019.

In summer of 1988, over 30,000 political prisoners were executed across dozens of cities in Iran after a fatwa issued by the former Supreme Leader, Ruhollah Khomeini. The victims of this clear case of crimes against humanity were primarily (90%) members or supporters of the main Iranian opposition, the People’s Mojahedin Organization of Iran (PMOI), also known as the Mujahedin-e Khalq (MEK).

As evidenced by Khomeini’s hand-written fatwa, the 1988 massacre amounts to genocide. Current Supreme Leader Ali Khamenei was president during the carnage, and Raisi, who has continued in his role as henchman to this day, was one of four members of the infamous death commission in Tehran. The book details the evidence for bringing both Khamenei and Raisi before an international tribunal.

Hon. Michael B. Mukasey, the 81st Attorney General of the United States, writes in the preface: “In the summer of 1988, a committee of four senior Iranian officials that became known as the ‘death committee’ acted to carry out the terms of a fatwa issued by then-Supreme Leader the Ayatollah Khomeini to kill tens of thousands of Iranian prisoners, most of them members of MEK…. Now, for the first time — in ‘IRAN: Call for Justice,’ Ebrahim Raisi, Iran’s new president, has been pulled out of the shadows and had the spotlight shined directly on him as one member of this committee. This slim volume tells the world much of what it needs to know about Raisi’s criminal deeds and bloody rise to power…This important volume deserves to be read and acted upon.”

In his foreword, former U.S. Democratic senator from Connecticut Joe Lieberman writes: “Raisi is unapologetic in response to charges that he led the death commissions of 1988 that resulted in the death of thousands of his fellow Iranians. He does not deny his involvement. He proudly defends it. In Raisi’s own words, ‘It is my honor that I fought against hypocrisy [MEK].’ That is why it won’t be difficult to make the case against him in an international court of justice. Raisi justifies the genocide of thousands of Iranians based only on their political opinions. And that is why he must be brought to justice for the crimes against humanity he has committed.

“…We should see him removed from the presidency and, most significantly of all, see this government removed from power in Tehran, so that the gifted people of Iran can again choose their own leaders and enjoy political and economic freedom and opportunity.”

Geoffrey Robertson QC, who served as the first President and Appeal Judge in the UN War Crimes Court in Sierra Leone, outlines the series of breaches of rules of international law by the Iranian regime during the 1988 massacre “which entail both state responsibility and individual accountability for war crimes and crimes against humanity.” He notes in his introduction to the book: “The situation in Iran today illustrates the consequences of impunity for crimes against humanity that have never been properly investigated or acknowledged… Supreme Leader Ali Khamenei was the President in 1988 and fully supported the prison massacres. Evin prison, scene of mass murder in 1988, remains a brutal environment for blindfolded prisoners picked up for no more serious offence than attending student demonstrations or contacting NGOs concerned about human rights…”

Evidence of Raisi’s involvement is overwhelming. While the concerns in the U.S. and the European Union may be the JCPOA, the real issue before them should be the need to institute legal proceedings against Ebrahim Raisi. Iran in 2021 is on the threshold of fundamental change. The clerics’ Supreme Leader, Ali Khamenei, finds his regime increasingly weak and in jeopardy following a series of uprisings since 2017, systemic corruption, a bankrupt economy, and an explosive society. Thus, Raisi, a notorious mass murderer, was handpicked by Khamenei, to take on the position of president of the regime.

‘IRAN: Call for Justice’ makes the case that if the world community is serious about ending the vicious abuses of human rights in Iran, it must take effective steps to end the impunity regarding the 1988 massacre and halt the unequaled rate of executions. Raisi’s presidency and the ongoing protest movement should prompt the world to recognize the Iranian people’s right to determine their future and to establish a free, democratic, secular, nonnuclear republic in Iran.