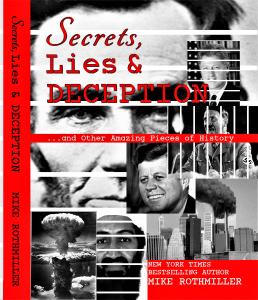 Cover of Secrets, Lies and Deception

After years of research and filling dozens of Freedom of Information requests, historian, former detective, and bestselling author Mike Rothmiller has uncovered the identity of President Lincoln’s gay lover.

Lincoln’s sexual preference has long been debated. However, until now, the identity of his gay lover during the Civil War was unknown. The author spent years scouring archives, newspapers from the time, and Civil War soldier’s diaries to finally uncover the name of this young Union officer.

The revelation comes from the personal account of Lt. Col. Thomas Chamberlain of the Maine Volunteer Infantry. Thomas is the brother of famed Civil War General Joshua Chamberlain, and the brothers fought side by side during the bloody siege at Gettysburg. Lincoln’s gay love affair occurred when the Maine Volunteers were providing security for Washington, D.C., and President Lincoln.

The Chamberlain brothers were close to the President and Mrs. Lincoln, and both knew of Lincoln’s secret love affair with the young officer under their command.

The author uncovered a second source confirming Lincoln’s gay affair with the soldier. She was a well-connected Washington, D.C. socialite whose father and husband occupied extremely high positions within the Lincoln administration.

The book Secrets, Lies, and Deception. And Other Amazing Pieces of History Vol. 1 tells the inside story of Lincoln’s and the young officer’s secret rendezvous’ when Mary Lincoln was absent.

Secrets, Lies and Deception and Other Amazing Pieces of History Vol. 1 also discloses over 80 fascinating true stories, most the government wanted to keep secret. They include; The Top-Secret telephone transcripts of President Bill Clinton’s conversation with the Prime Minister of Pakistan revealing his knowledge of Usama bin Laden’s planned terror attacks on the United States. The plot to assassinate the Mexican President and the U.S. Government’s conspiracy to protect the indicted cocaine kingpin who plotted to kill the Mexican President.

Secrets, Lies and Deception and Other Amazing Pieces of History Vol.1 is available at Amazon.com and Barnes & Noble.com
Contact:
Author Mike Rothmiller is available for interviews.
mikerothmiller@gmail.com
928-642-5674