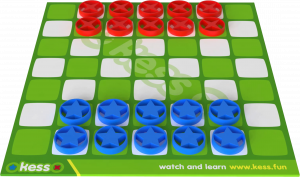 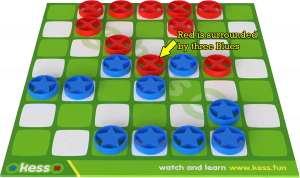 The rules of Kess are simple, but the skill ceiling for players is sky high

APPLETON, WIS., UNITED STATES, September 30, 2021 /EINPresswire.com/ — A new, lightning-fast, one-on-one board game, Kess, is growing in popularity across the country, establishing what its creators believe is the beginning of a Kess craze.

From its home base in Appleton, Wisconsin, games startup KESS, LLC created Kess after years of trial and error.

The Kess “battlefield” is a seven-by-seven-inch grid of squares, just a bit smaller than a chess board, and each player gets 10 pieces. When the game begins, the action is fast and furious because each player gets five moves per turn, making for a quicker but more tactical playthrough. Each turn is more like an onslaught, rather than the execution of a single play. To take an opponent’s piece, it only needs to be surrounded on three sides.

Players engage in an audacious game of wits that lets them quickly slip into a “strategy brain” and they get totally lost in matches as they try and peer into the future, pick apart the board and attempt to predict the moves of their opponents.

Hundreds of strategies can be employed during a game and there are trillions of ways a game can unfold, allowing endless skill building and constant surprises.

Like all great strategy games, Kess forces players to utilize sneak attacks, fake-outs, perspective and decision-making in order to defeat their opponents.

Children love the ultra-simple rules and the colorful board and game pieces. Adults enjoy the hidden depth of the game, as it forces them to think outside the box as they balance offense and defense.

For more information about playing Kess, or to purchase the game, visit kessgame.com. Visitors to the site can also subscribe to a newsletter and get invited to online tournaments.

A digital version of Kess is also available for free in the Apple Store and on Google Play.

About Kess
We are KESS LLC, a small startup based out of beautiful Wisconsin. All we do is make board games. And Kess is our first product. Kess is a game of strategy that is really fast moving, thus it is suitable for those of us who like games to move fast and who get to win or lose fast. And it is 100 percent skill based, there is no element of luck, so if you have a fast brain, you could be really good at Kess. It really has been a long, long time since a really original board game came out. So, we thought, let us make one that is original, moves fast, allows strategic thinking and yet is super fun for the whole family. We are working on the online version of Kess, but nothing beats being able to play with a real board and real pieces. Kess is the kind of game you could play on your porch or on the beach or at the park. Everybody gets to have a whole lot of fun and that is what matters.