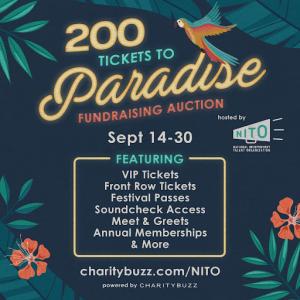 Powered once again by Charitybuzz, 200 Tickets to Paradise launched at 9am EDT, September 14th, and is coming to a close Thursday, September 30th. This auction offers the opportunity to bid on hot ticket items like passes to sold out shows and festivals, VIP & front row ticket packages, exclusive merch, soundcheck access, meet & greets, annual memberships, and more.

For a full list of auction items and bidding information, visit charitybuzz.com/NITO. Proceeds will benefit the National Independent Talent Organization, an entirely volunteer-run non-profit membership organization serving as a united voice for the independent live music community as they navigate the immense hurdles presented by the pandemic.

To learn more about NITO’s mission and accomplishments up to this point, visit nitolive.org.

National Independent Talent Organization (NITO) is a non-profit coalition of independent talent agencies, management firms, artists and live touring entities which has been working tirelessly to advocate for the survival of the live music community as the nation and economy slowly recover from the COVID-19 pandemic.