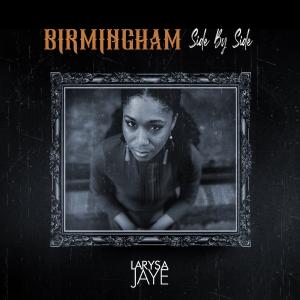 The sizzling southern artist releases soulfully sensitive new single, “Birmingham (Side by Side),” as a prayerful tribute to civil rights era tragedy

…Birmingham (Side by Side). This song is so special. My prayer is that it reminds us how connected we are.”
— Larysa Jaye, Nashville recording artist

UNITED STATES, September 29, 2021 /EINPresswire.com/ — Nashville-based soul artist Larysa Jaye isn’t afraid to challenge the status quo in a town driven by the sounds and stereotypes of deep-rooted — and predominately white country music traditions. True to form, Jaye’s October 1st release of “Birmingham (Side by Side),” unapologetically sheds light on one of the darkest incidents in civil rights history. The fresh rendition of a song named for what Martin Luther King, Jr. described as “one of the most vicious and tragic crimes ever perpetrated against humanity” was produced by Grammy-nominated musician and producer and Music City Collective CEO, Billy Smiley, and with distribution though Sony music subsidiary the Orchard on all major platforms October 1st, 2021. Larysa Jaye’s “Birmingham” is a strong but gentle reminder that change has been a long time coming.

As a Kansas City, KS native, Jaye’s early influences ranged from various Christian artists such as Carman, Fred Hammond, Helen Baylor, and Out of Eden. Later shifting to legendary R&B performers such as Tracy Chapman, Whitney Houston, Ms. Lauryn Hill, & Mary J Blige, her musical curiosity didn’t stop there. After her family relocated to Nashville, the influences of the city’s rich country music history have continued to mold Jaye as an artist and to shape the evolution of her musical career. Part of that journey has seen Jaye take on stages like the Nashville Soul Music Festival where she warmed up the audience for Atlantic Starr, Regina Bell, Dem Franchize Boys and more. The National Museum of African American Music has included Larysa as part of their Emerging Artists program, giving her the opportunity to represent them at various events throughout Nashville, including the 31st Anniversary MLK Convocation held at Tennessee State University. Larysa has also been part of some notable projects like the Christian rap duo GRITS single “We Grow Old” featuring Jaye along with Kevin Max from dc Talk, and her debut single “Forbidden Heart Club Blues” was included in the Enormous: The Gorge Story which was in select theaters across the country.

In an era where the battle for rights and equality passionately continues to challenge patterns of discrimination in all corners of society, Jaye’s ‘Birmingham’ release is her own version of a prayer; the bold young singer and mother of four says she wants the song to be heard as a message “that reminds us how connected we are.” As a Black artist in a predominately white country music world, Larysa Jaye doesn’t shy away from the opportunity to address issues of race and the complexion of artistic representation in Nashville’s music scene.

It’s a conversation that extends beyond Nashville; a recent feature from the Nashville Tennessean showcased the second installment of a nationwide artistic focus series, ‘Hallowed Sound’, produced by the USA TODAY Network of journalists. The collection of stories and insights from journalists around the country is part of a larger effort to shine light on the rich history and musical contributions of Black artists; more specifically, it is a call to Nashville that the state of race in country music is overdue for an honest examination. As a Nashville recording artist, Larysa Jaye is one of the new Black artists trying to blur the lines of color in a town where relatively few have found success.

While Jaye and other artists continue to challenge traditional definitions in Nashville’s country music scene and elsewhere, songs like “Birmingham (Side by Side)” are becoming part of a collective voice that is redefining the narrative of Black artists at all levels. With success that is spring boarding beyond the “girl next door” feel and captivating stage presence that initially draw her audiences in, Larysa Jaye is hopeful that stirring the ghosts of civil rights past with this new release of “Birmingham (Side by Side)” will cast greater attention and an increasingly brighter light on the future of country music’s Black artists, along with a louder call for unity in all dark corners of social injustice.

Larysa Jaye’s music is available on all major platforms; for more about the artist and upcoming performances visit larysajaye.com.
musiccitycollective.com
soundkitchen.com
###