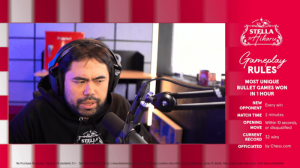 PALO ALTO, CA, UNITED STATES, June 3, 2021 /EINPresswire.com/ — On Tuesday June 1 Super Grandmaster Hikaru Nakamura broke the world record of most victories against unique opponents in one hour in the 1|0 bullet time control. He accomplished this feat on Chess.com in the Bullet Chess Speedrun presented by Stella Artois.

“If that first game hadn’t gone two minutes, it could have been 53, maybe 54,” said the new world record holder right after the event.

It was the first time that Stella Artois, a Belgian beer brand, worked with a chess streamer on Twitch. A Stella representative expressed gratitude and joy about this first cooperation with Chess.com in a message to the Chess.com team that had arranged all the work behind the scenes.

“Stella Artois making a move into chess is an unexpected, yet perfect, match,” said Lara Krug, vice president of marketing for Stella Artois.

“This was our first–hopefully of many– events with them,” added Austin Gasparini, Chess.com Director of Business Development.

Chess.com is the world’s largest chess site and leader in chess news, lessons, events, and entertainment. More than 10 million chess games are played on the site every day. Visit Chess.com to play, learn, and connect with chess—the world’s most popular game.