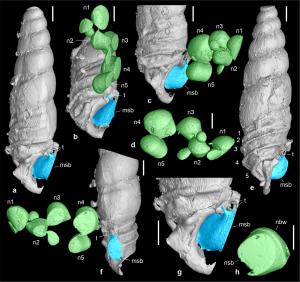 The exceptional finding of a mother land snail entrapped in resiny ooze during live birth and fossilized in mid-Cretaceous amber is reported for the first time.

FRANKFURT, GERMANY, May 25, 2021 /EINPresswire.com/ — Remarkable discoveries of prehistoric life fossilized in amber have been widely reported in the past few years. The most common inclusions encompass insects wretchedly entrapped while mating, carrying eggs, laying eggs, and feeding. So far, inclusions of land snails have been seldom while those documenting land snail activity and behavior are practically nonexistent.

The fossil record of land snails is mostly studded by dried, crusty shells or imprints in stone matrix. When behavior gets preserved in amber this is truly remarkable, especially considering that snails are not known for being active animals anyway. In a simple piece of amber, the first rare find of an exceptionally preserved mother land snail is captured giving live birth during the mid-Cretaceous (99 million years ago), when she and her progeny got engulfed by oozy resin and then fossilized in the amber-rich beds of what is today Myanmar (Burma). Encapsulated in the amber is the complete adult shell and the marshmallow-like body of the mother snail exuding slimy mucus together with five baby snails. As if sensing her impending destiny, the mother snail’s tentacles are seemingly stretched on “red alert” in anticipation of the next sticky wave of resin. This unique incidence was discovered by Dr. Adrienne Jochum from the Naturhistorisches Museum der Burgergemeinde Bern (NMBE), the University of Bern, Switzerland and Senckenberg Forschungsinstitut und Naturmuseum Frankfurt and described together with her international team of researchers from Germany and China, Dr. Thomas Neubauer (Justus-Liebig University Giessen) and Dr. Tingting Yu (State Key Laboratory of Palaeobiology and Stratigraphy, Nanjing Institute of Geology and Palaeontology, Chinese Academy of Sciences) in a recent paper published in the journal Gondwana Research.

Based on high resolution photographs and micro-CT images, the mother snail is described as a new species of fossil cyclophoroid, Cretatortulosa gignens. Modern relatives of this species-rich group of land snails occur mostly worldwide in warm latitudes and bear a shell-like covering (operculum) over the entrance of the snail shell when inactive. The few snails that have so far been described from Burmese amber belong mostly to the Cyclophoroidea.

Interpreting this exceptional and informative fossil within the bigger picture of land snail history, ecology and diversity is multifaceted. Though live births (viviparity) are commonly known amongst other animal groups and in some land and freshwater snails, most snails lay eggs in the external environment. In sync with her modern relatives, Cretatortulosa most likely spent her life inconspicuously hunkered down munching on dead and decaying leaves and minding her own business amidst the predator lurking, tropical forest of the mid-Cretaceous. By retaining her offspring and bearing her young fully alive, this mother snail likely protected them as long as possible from the hostile environment of hungry predators. To counteract space constraints of pregnancy, fewer and smaller offspring would likely have been released per birth while enhancing individual survival and availability of food resources.

This finding not only predates previously found proof of viviparity in the fossil record of land snails by about 80 million years, it additionally provides unprecedented insights into the morphology, reproduction and paleoecology of Mesozoic representatives.