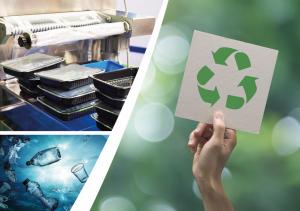 More and more plastic worries consumers. How does the meat industry respond?

The problem of plastic is a subject increasingly being raised internationally.

CANADA, September 3, 2021 /EINPresswire.com/ — The problem of plastic is a subject increasingly being raised internationally. Everyone has heard about tons of rubbish accumulated in the vast waters of the oceans. Plastic waste is transported over long distances by sea currents and can settle on coastal beaches, break down into microplastics or form large islands of rubbish trapped in ocean eddies. One of the most polluted bodies of water is the Atlantic Ocean, so this problem is particularly important for North America and the European Union. According to recent studies, up to several hundred million tons of plastic may be accumulated in the waters separating Europe and America. In view of the global problem described above, it can be concluded that reducing the use of plastics in food production should be one of the basic objectives of modern ethical agricultural production. Actions to be taken in the area of the circular economy, including, among others, plastics management, are one of the main elements of the European Green Deal strategy.

The problem of plastics is particularly important for the food sector, as materials used to package food account for almost half of all municipal solid waste. Some European retail chains are encouraging suppliers to collaborate in efforts to reduce the amount of plastic used, with European manufacturers already taking steps to reduce their use of plastics.

The EU aims to make all plastic packaging recyclable or reusable by 2030, with the recycling rate to reach more than 50% of plastic packaging already in circulation by 2025. The strategy lays the foundations for a new plastics economy in which designing and manufacturing of plastics, also for the food industry, will take full account of the need to reuse and recycle this material. This will bring a reduction in plastic pollution in the EU and at the same time minimize its negative impact on our lives and the environment. This is confirmed by data from the EU, where the recycling rate of packaging waste (including plastic) increased steadily between 2008 and 2018. It can be assumed that the policies pursued by the European Union in the future will continue to keep this rate on an upward trend.

The industry of biodegradable materials is also developing rapidly, which can gradually replace plastics without harming the environment. Bio-based plastics are mainly used in the production of packaging, including food packaging. In recent years, many solutions have been developed based on starch or cellulose, saccharides produced on most farms in the world. The first of them is used in the production of biodegradable film. Starch packaging is characterized by adequate durability, cohesive strength, gas permeability, and good chemical performance. Cellulose films, on the other hand, thanks to their vapor-permeable properties, are successfully used to store products that do not require a complete barrier from moisture and gases.

Surveys across the US show that 55% of consumers are concerned about the overall environmental impact of packaging. Almost half of those surveyed indicate that the environmental impact of packaging is extremely or very important to them. This means that a large proportion of customers are interested in buying products in more environmentally-friendly packaging due to an awareness of the problem of plastic packaging management. The same research indicates that recyclable packaging is rated highest by the majority of consumers. Environmental action can be appreciated by shoppers
– between 60 and 70% of Americans say they are willing to pay more for sustainably produced and managed packaging.

All these measures make it a good idea to choose European meat products, not only for culinary reasons but also for environmental reasons.

ABOUT UPEMI:
Union of Producers and Employers of Meat Industry (UPEMI) is a modern and dynamic organization that integrates the community of pork and beef producers in Europe. The mission of UPEMI is to promote European meat on foreign markets and to provide reliable and comprehensive information on meat quality, high standards and production systems in place in the European Union. UPEMI brings together companies from all stages of production, which share the values of fair animal breeding and the production of high-quality pork and beef.