Outstanding Berdan Sharps Model 1859 rifle, bore .52, one of the finest-condition rifles known of the approximately 2,000 shipped to Berdan in 1862. Extraordinary condition, all original in original Civil War-era rifle case, ID’d to James Baker of Ohio, w 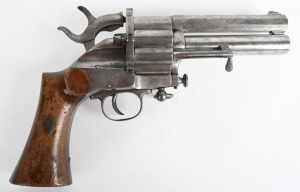 Huge and gruesome 18th-century hand-forged man trap, 55in wide with 17.5in spread of riveted teeth. Nearly identical to an example in a Lincoln, Illinois museum. Provenance: Phil Majerich collection. Estimate $2,500-$3,500

Rare Vietnam-captured Hungarian 91/30-M52 sniper rifle, 1953, one of the rarest of all Mosin-Nagant variations and one of only a handful known to have originated from the Vietnam War. Provenance: Gary Thomas collection. Estimate $5,000-$7,000

WILLOUGHBY, OHIO, UNITED STATES, January 25, 2021 /EINPresswire.com/ —
Milestone Auctions’ Premier Antique & Modern Firearms Auctions traditionally include the cream of the crop from many categories, ranging from provenanced early arms associated with historic battles to high-condition, fresh-to-the-market examples from noted private collections. That’s what bidders can look forward to seeing on January 30 at Milestone’s exceptional 832-lot sale. All forms of remote bidding will be available to those who cannot attend in person, including live online.

Two highly refined collections will be offered in their entirety: the late Gary Thomas’ military gun collection, and the Phil Majerich collection of early explorers’ traps and accoutrements. Both of these long-held collections were amassed primarily through private transactions, therefore 99% of their contents have never before appeared at auction.

Ohioan Gary Thomas, who passed away in September, specified in his will that he wished for his collection to be auctioned by Milestone. “Gary built one of the largest private collections of military weapons with ‘bring-back’ paperwork – documents that proved GIs had the legal right to return home to America with their war trophies,” said Chris Sammet, co-owner of Milestone Auctions. “This sort of paperwork is considered the ultimate in authentication, as it tells us who carried a particular gun, where it was used, and its serial number.” The Thomas collection also includes one of the largest known private collection of documented Vietnam War weapons.

The second highlight collection in the sale is that of Pennsylvanian Phil Majerich. “Phil’s collection focuses on early explorers’ traps and accoutrements, especially hand-forged examples from the golden age of America’s fur trade through the Civil War,” said Sammet. “The traps were not manmade or mass produced. Many were made by the same 19th-century blacksmiths who made Kentucky rifles, hide scrapers, or other metal objects used by settlers. It’s the most extensive known collection of early, hand-signed traps.”

Strong interest has already been expressed in a Berdan Sharps Model 1859 described by Sammet as “one of the finest-condition Sharps ever discovered of the approximately 2,000 that were shipped to Berdan in 1862.” In extraordinary all-original condition, and retaining its original Civil War-era rifle case bearing the owner’s name, the gun is identified to James Baker of Wayne County, Ohio, who enlisted with the legendary Berdan Sharpshooters, 1st Regiment, Company K, at age 20. The consignor’s grandfather acquired the rifle from a neighbor who was a member of James Baker’s family. Estimate: $20,000-$30,000.

A Sharps Model 1878 rifle steeped in American firearms history belonged to Col. George W. Wingate, who served as the NRA’s first secretary and later (in 1886), its president. He is also noted for having fired the first shots at Creedmoor on April 25, 1873. Extensive documentation supports the gun’s ownership, and it comes with an American Legends medal display that features Wingate, plus Remington Library prints, and publications authored by Wingate, including an original 1873 edition of Manual For Rifle Practice. Estimate: $8,000-$12,000

The 1903 US Springfield 30-06 Presidents Match Trophy rifle awarded to USMC Gunnery Sgt. John Thomas is the fourth of only five that were made and one of only three whose whereabouts are known. Sgt. Thomas was the first Marine to win the prestigious shooting award. This superlative presentation rifle is offered together with 16 shooting medals and ribbons, booklets and ephemera. Estimate: $20,000-$30,000

The name “Cuno Helfricht” is synonymous with the ultimate in gun engraving, and Milestone’s January 30 auction includes a superb example of Helfricht artistry in the form of a Colt .45-caliber single-action presentation Army Revolver. It is one of four guns that were shipped on April 15, 1887 to Colt distributors Hartley & Graham, New York, and engraved by Helfricht or his shop. The custom engraving documents the gun’s presentation in 1892 to Jefferson Davis Kurtz, a former Confederate soldier and future sheriff of Volusia County, Florida, who was killed in line of duty in 1895. Estimate: $25,000-$35,000

Old West history comes to life in the form of two auction lots in particular. A Colt .36-caliber Model 1851 Navy revolver is attributed to the ferocious Old West outlaw Dave Rudabaugh, who consorted with Billy the Kid, Billy Wilson’s gang and other ruthless criminals, and feuded with the Earp brothers. Condemned to the hangman’s noose, Rudabaugh escaped jail but later ended up in gunfights and met a grisly end, as described in the auction catalog. His Colt is accompanied by letters and an original book about his life of crime. Estimate: $8,000-$12,000

Representing the other side of the law from that period, Milestone offers an 1860 Colt conversion .44 [Colt] caliber/.44 CF gun owned by and engraved with the name of Sheriff James Glispin. “He was the leader of the posse that killed Charlie Pitts and captured the Younger gang after their 1876 attempted bank robbery known as the Great Northfield Minnesota Raid,” Sammet explained. “It really should be displayed in the Gene Autry museum, with the likes of John Wesley Hardin’s gun.” Accompanied by a 1951 letter written by Glispin’s granddaughter, it comes to auction with a $15,000-$25,000 estimate.

A stellar firearm from the Gary Thomas collection, a rare Vietnam-captured Hungarian 91/30-M52 sniper rifle was made in 1953 and is one of the rarest of all Mosin-Nagant variations. It is one of only a handful of surviving guns of its type known to have originated from the Vietnam War. Estimate: $5,000-$7,000. Also from the Thomas collection, a 1959 East German Karabiner-S SKS rifle, one of approximately 35 known in the United States, could reach $6,000-$10,000.

In a league of its own, a Colt 1911 US Army .45ACP pistol, made in 1913, was the personal property of Maj. Gen. Julian Sommerville Hatcher, a noted firearms expert, author and technical editor of NRA’s American Rifleman magazine. General Hatcher used the weapon in both World War I and World War II. Its pre-sale estimate is $7,500-$10,000.

Last but not least, there’s the pistol so many contemporary firearms collectors are after: an extremely desirable first-year (1955) Colt Python .357 Magnum. With its original shipping box and factory letter confirming both the serial number 559 and its original recipient, Charlottesville (Va.) Hardware Co., it has an auction target of $20,000-$30,000.

Next Article Ecommerce Poised For 10X Growth in 2021: Honour Media Co Features Messenger Marketing as Star of The Show

The Rural Activities Market Too Sees Technological Advances – Such As Drone Fishing!