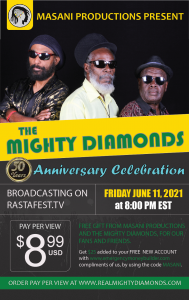 TORONTO, ON, CANADA, May 27, 2021 /EINPresswire.com/ — The Mighty Diamonds 50th anniversary celebration concert – June 11th, 2021
The 1982 Grammy-nominated Mighty Diamonds is celebrating over 50 years in the reggae music industry with a concert broadcasting on Friday, June 11th, 2021 at 8:00 pm on www.rastafest.tv and www.realmightydiamonds.com. Formed in Trench Town in 1969, one of Jamaica’s premier harmony trios continues to record and perform for reggae music lovers throughout four continents. Celebrating the rare distinction of more than 50 years of making music together from the most militant roots reggae to the sweetest lovers’ rock, The Mighty Diamonds are Lloyd “Judge” Ferguson, Fitzroy “Bunny” Simpson, and Donald “Tabby” Shaw. All three members sing on the recordings and during live performances, Donald “Tabby” Shaw is the lead vocal.

The three veteran reggae warriors have risen from the poverty and despair of inner-city Kingston to become one of Jamaica’s legendary reggae ambassadors and continue to travel throughout the Americas, Canada, Asia, Europe, and the Caribbean spreading the gospel of peace, love, and harmony to encourage the emancipation from mental slavery. The Mighty Diamonds has made an impact worldwide with their continuing contribution to the reggae music industry. Every reggae fan has at least one favorite song by The Mighty Diamonds: “Pass the Kutchie”, “Right Time”, “Master Plan”, “Tamarind Farm”, “I Need a Roof and the list goes on.

“Right Time”, The Mighty Diamonds’ breakthrough album on the Channel One label elevated the group to rock star status in 1975. Produced by Joseph Hoo Kim, “Right Time” brought together the Jamaican musical elite Sly and Robbie (drum and bass) and Ancel Collins (keyboards) who helped on hits such as “Africa,” “Have Mercy”, “Natural Natty”, “Them Never Love Poor Marcus” and the reggae anthem, “Pass the Kutchie” which continues to be a mega-hit. This song has been sampled by many artists such as Musical Youth, Lauryn Hill, Michael Franti, and Wyclef Jean. The “Right Time” album firmly established Lloyd “Judge” Ferguson and Fitzroy “Bunny” Simpson as two of Jamaica’s most influential songwriters in the reggae music industry.

Along with having more solo recordings than they can count under their belts, The Mighty Diamonds have appeared on a number of compilations including “Fire on the Mountain”, “Reggae Celebrates the Grateful Dead” (Pow Wow, 1996); “Old to the New” a Steely & Clevie tribute to Joe Gibbs Classics (VP, 2002); “Is it Rolling Bob”, a Reggae Tribute to Bob Dylan (Sanctuary, 2004) and in 2009, The Mighty Diamonds released “Special Lady”, a Ray Goodman and Brown’s 80’s ballad on their independent label, Street Corner Music.

In 2016 South Florida’s own Joseph Benaiah aka Capo Diamond joined Judge and Tabby on vocals on stage as the new face of The Mighty Diamonds. Capo Diamond comes with the energy and years of experience as a talented bandleader, musical director, and guitarist. During 2016-2017 The Mighty Diamonds continued to perform extensively at major festivals and club dates throughout Europe, Canada, Central, and South Americas, making Brazil, Mexico, and the French Polynesian Islands the competing countries with the most insatiable appetite for The Mighty Diamonds music.

The Jamaica-based Mighty Diamonds celebrate 50 years of performing as a group in 2019, making their iconic contributions to reggae music a golden opportunity for these living legends to continue to perform songs that we love to enjoy live and direct in a city near you. In recognition of The Mighty Diamonds’ 50th anniversary, Masani Productions produced a series of Jamaican concerts in January 2020 in Montego Bay at Rastafari Indigenous Village and in Negril at Roots Bamboo. Look out for The Mighty Diamond’s brand new CD launching on Rastafest virtual festival on Saturday, August 21st, 2021 as they celebrate more than 50 years in the reggae music industry.