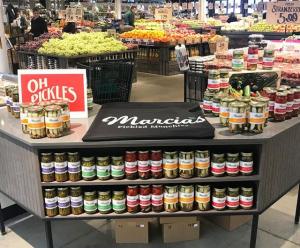 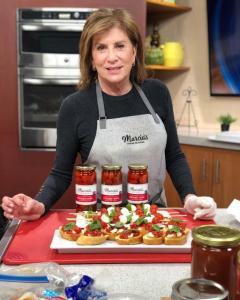 Everything is all-natural, with time-honored recipes, and it is showing in the flavor as customers love this snack and with their favorite sandwich

“I am very proud to be part of Michigan’s growing food community and to support local urban agriculture,” ”
— Marcia Nodel, Founder Marcia’s Munchies

BIRMINGHAM, MI, UNITED STATES, September 7, 2021 /EINPresswire.com/ — When her children were young, Marcia Nodel of Birmingham, Mich. began making her own pickles and other snacks as a weekend treat.

Her handmade additive-free snacks soon became popular among her friends and family Nodel’s caramel corn, pickles, jams and fancy nut mixes gained popularity among friends and family who always wanted to have her delicacies stocked in their pantries. After deciding that others deserved a taste too, Marcia began selling her artisanal snacks at gourmet food stands in Southeastern Michigan.

After her children were grown and started having families of their own, Nodel decided to make pickling a full-time venture. She launched Marcia’s Munchies and expanded her product line to various pickled options, such as bread and butter, dills, spicy pickles, tomatoes and asparagus – now sold in grocery stores across Michigan, Ohio, Illinois, New York and California and also online.

“At 60 years old, I did the opposite of settle-down and retire. Instead, I took my hobby and started a business,” she said. “I founded Marcia’s Munchies on principals of all-natural eating – aiming for my products to be tasty, healthy snack options that are household staples.”

Nodel’s pickles can also be found on the sandwiches at Zingerman’s Delicatessen in Ann Arbor. Across the country in New York, Ohio, California, and online. Her products and recipes have been featured on television and in Hour Detroit Magazine, and most recently, “Wild Dills” – her spicy pickles – were featured on the national web show Eat More Pickles.

Four years ago, when her business outgrew her kitchen, Nodel collaborated with local companies Scotty O’Hotty and M&R Ventures to create the co-packing facility FEAST Detroit. Today, Marcia’s Munchies are developed and bottled within the 14,500-square-foot facility in Inkster, alongside other Michigan-made start-ups.

Nodel’s business checks all those boxes as her products are made with fresh, local produce and all-natural ingredients, and they are also fat and gluten free. She chooses the ingredients for her products in conjunction with Michigan State University’s Culinary Service and Community Partners Program, which ensures that farmers provide fresh, local and all-natural produce.

Marcia’s Munchies is a purveyor of all-natural hand-packed gourmet snack food made in Michigan. Bread and Butter Pickles in an Heirloom Fashion. Marcia’s Munchies brings you a century’s old tradition in an heirloom fashion. Dating back to the Depression era, thinly sliced pickled cucumbers were placed between slices of bread lathered with a slab of butter to make a whole meal, giving rise to the name bread & butter pickles. Pickles have been on the American table ever since. Marcia’s celebrates American farm to table tradition with these all-natural hand packed products made in Michigan.

Marcia’s adds a fresh habanero pepper to these classic bread & butter pickles to give you Little Hotties. They are fat and gluten free, and high in vitamin-enriching and digestive properties. Spicy Pickles for the traditionalists among us, Marcia’s Wild Dills are cucumber spears flavored with garlic and dill for the perfect deli pickle taste – crunch!

In addition to the classic favorites, Marcia’s Cherry Pops are bursting with flavor. Preserved with vinegar, rosemary and thyme, these pickles tomato the perfect.

Cherry Pops accompaniment to pastas, salads or charcuterie plates. And they’re delicious on their own too! The ‘Sparagus has a tangy and spicy pickled asparagus spears are the perfect addition to any salad, charcuterie plate or bloody Mary.

“I am very proud to be part of Michigan’s growing food community and to support local urban agriculture,” Nodel said. “The exciting part is now customers across the country are starting to enjoy Marcia’s Munchies too.”

For more information about Marcia’s Munchies, to purchase products and to find recipes, visit www.marciasmunchies.com or follow on Facebook at www.facebook.com/MarciasMunchies.