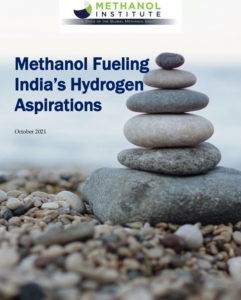 To achieve realistic goals it is important for India to focus on adopting a progressive roadmap involving practical solutions that can lead to the realization of the country’s hydrogen aspirations”
— Prakriti Sethi, Methanol Institute India Representative

IMEC creates a local ecosystem for Indian businesses that have an interest in increased methanol production and consumption in India to collectively stimulate a favourable climate for the methanol industry. With growing interest in methanol and future demand prospects, the workflow is divided into three categories: renewable methanol, methanol as a hydrogen carrier, and methanol as a road transport fuel. The key pillars of IMEC include policy advocacy, research & knowledge exchange, pilot projects, and communications & outreach.

Platform members have discussed ideas on methanol production pathways from renewable feedstocks such as captured carbon dioxide, agricultural waste, and municipal solid waste (MSW). As interest in hydrogen grows in India, IMEC member companies are inclined to explore methanol’s role as a hydrogen-carrier and the market for methanol fuel cells in India.

In conjunction MI released a white paper “Methanol fueling India’s hydrogen aspirations” that positions methanol as a superior hydrogen carrier and discusses how a methanol economy can support a future Indian hydrogen economy. To meet its energy needs, the country is expanding its energy portfolio, and increasing its momentum to reduce the carbon footprint. The launch of India’s National Hydrogen Energy Mission (NHEM) in March 2021 suggests that hydrogen will play an important role in combating climate change.

“To achieve realistic goals it is important for India to focus on adopting a progressive roadmap which involves practical solutions that can lead to the ultimate realization of the country’s hydrogen aspirations,” said Methanol Institute India Representative Prakriti Sethi. “With the highest hydrogen to carbon ratio of any liquid fuel, methanol circumvents the common challenges associated with storing, transporting, and utilizing hydrogen and support faster adoption of hydrogen.”

The IMEC Coalition is open to any entity supporting the widespread adoption and sustainable use of methanol as an energy product. To become a member and learn more about the Coalition, contact the Methanol Institute India Representative, Prakriti Sethi at psethi@methanol.org