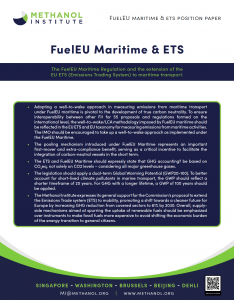 BRUSSELS, BELGIUM, October 18, 2021 /EINPresswire.com/ — The Methanol Institute (MI) has welcomed the European Union’s package of proposals known as Fit for 55 as an opportunity to advance the availability of alternative fuels for shipping. But MI has urged the Commission to consider how best to support the industry on the journey towards the ultimate goal of carbon neutrality by 2050.

In a recently published policy position paper* MI states that supply-side mechanisms aimed at spurring the uptake of renewable fuels should be emphasized so as to make low carbon and net carbon-neutral fuels more affordable and so drive the switch to renewables. The MI also recommends a steeper incremental increase of the FuelEU Maritime GHG reduction targets beyond 2030, accelerating faster than currently proposed, to direct investment towards alternative fuels offering transitional pathways towards carbon neutrality.

The Methanol Institute also supports the extension of the Emissions Trading System to shipping as long as the system is grounded in Lifecycle Assessment (LCA) and the concept of CO2 equivalence, but proposes a five-year phase-in, starting in 2030, to help overcome industry resistance to change and enable experience-building to be incorporated into the policy.

While the EU’s proposal to apply carbon pricing to extra-EU voyages under the ETS is an issue of concern for the shipping industry, the MI doubts that progress of climate action at the IMO will be sufficient to satisfy European lawmakers. Should the opportunity to impose a global fuel levy arise within the phase-in period, EU policymakers should be empowered to abandon the extension of ETS to maritime transport in favour of a more effective instrument with a global scope.

“To successfully facilitate the increased supply and use of alternative marine fuels, it is critical that the EU ETS yields a carbon price that proves sufficient to trigger a systemic shift towards renewable and lower-carbon fuels for the maritime sector,” said Matthias Ólafsson, MI’s Manager of Government and Public Affairs, Europe. “The ETS and FuelEU Maritime initiatives must address the most significant challenge to achieving greenhouse gas emission ambitions of the maritime sector, which is the lack of clear vision and corresponding support required to ensure uptake of sustainable marine fuels.”

To safeguard interoperability between other Fit for 55 proposals and regulations formed on the international level, MI believes the well-to-wake/LCA methodology used in FuelEU maritime should also be reflected in the EU ETS and EU taxonomy for measuring emissions from maritime activities.

Other recommendations by the MI include:

* The ETS and FuelEU Maritime should expressly state that GHG accounting be based on CO2 equivalence, not solely on CO2 levels and include all major greenhouse gases.

* To better account for short-lived climate pollutants in marine transport, the Global Warming Potential should reflect a shorter timeframe of 20 years. For GHGs with a longer lifetime, a GWP of 100 years should be applied.

* The ETS system should calculate the GHG performance of fuels based on a well-to-wake approach and apply CO2eq to reflect the complete environmental profile of fuels, in alignment with the provisions of FuelEU Maritime.

About the Methanol Institute

The Methanol Institute (MI) is the global trade association for the methanol industry, representing the world’s leading producers, distributors, and technology companies. Founded in 1989 in Washington DC, MI now represents its members from five offices around world in Washington DC, Beijing, Brussels, Delhi, and Singapore. MI serves its members as the voice of the methanol industry, representing companies within the membership to governments and businesses around the world to promote the sustainable growth of the industry. MI focuses on advancing the utilization of methanol as a clean fuel in energy-related applications such as land & marine transport, power generation, fuel cells, industrial boilers, and cookstoves. MI also supports sustainable and renewable processes to produce methanol as a carbon-neutral chemical and fuel.