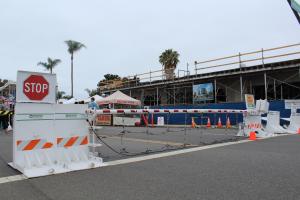 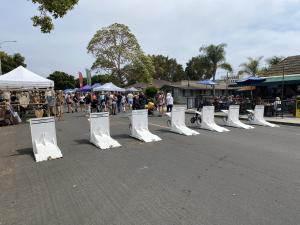 There was excitement in the air, and we ensured that our event planners were careful to implement precautions in compliance with health orders, including maintaining plenty of space for people.”
— Bret Schanzenbach, CEO of the Carlsbad Chamber of Commerce

CARLSBAD, CA, US, September 1, 2021 /EINPresswire.com/ — Big crowds were back on the streets of Carlsbad for the annual Village Faire and Meridian Rapid Defense Group was there again to ensure a safe event.

The Faire drew tens of thousands of residents and visitors and the organizers enlisted Meridian to create a large cordoned off pedestrian-only zone that covered five blocks of downtown Carlsbad. It involved bringing in more than 100 of Meridian’s unique Archer 1200 mobile vehicle barriers.

“Whenever you have enormous crowds like that, just one rogue vehicle in the mix can create a serious threat to everyone’s safety,” said Peter Whitford, CEO of Meridian Rapid Defense Group.

The barriers are made of 700 lbs of USA made steel and can be quickly moved into position by one person. In contrast, large concrete and water barriers need heavy equipment to set. This alone has become one of the many reasons Meridian’s Archer 1200 Barriers have become a familiar sight across the US.

In Carlsbad the barriers, with the addition of an Archer Beam Gate (to allow emergency vehicles access), were placed across 20 access points leading to the Faire. Crash tests have shown the barriers will stop a speeding car. They were placed in such a way that no vehicle could pass through, yet pedestrians could move easily between them.

Meridian worked with the Carlsbad Police Department to get the barriers out quickly before the event. The mobility of the barriers meant that within a short time of the Faire ending, the streets were once again open to vehicle traffic.

Bret Schanzenbach, CEO of the Carlsbad Chamber of Commerce told The Coast News, “We wanted to be cautious, but have a great experience.”

“There was excitement in the air, and we ensured that our event planners were careful to implement certain precautions in compliance with health orders, including maintaining plenty of space for people to move around.”

Mr. Whitford said, “We don’t just turn up and drop off our barriers. At Carlsbad and before each and every rental event, Meridian’s fully certified deployment team prepares a certified Vehicle Safety Mitigation Plan and executes it.”

Meridian Rapid Defense Groups sells and rents the Archer 1200 Barriers. The City of Carlsbad owns more than 30 barriers and for this event they rented another 70 to create the secure zone surrounding the Faire.

“Once again this was a very well organized and well attended event, and especially so after such a testing past year,” said Mr. Whitford. “We were happy to have played our part in working with Carlsbad police and city officials to ensure that everyone got to enjoy themselves safely.”