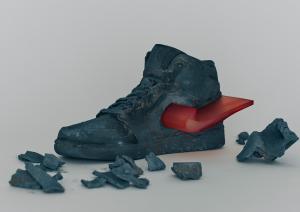 TOKYO, JAPAN, June 3, 2021 /EINPresswire.com/ — Seitaro Yamazaki, a Japanese born conceptual artist, has been selected as a 2021 nominee for YICCA. YICCA is an International Competition for Contemporary Artists, where the goal is to showcase new talent and upcoming art. Seitaro Yamazaki was selected as a 2021 nominee for his piece
Icon Made Sand #1 “Nike AIR JORDAN 1”. His piece centers on the theme of time and explores the question of how the future will look back on us today. Growing up in the midst of Tokyo Street culture, Yamazaki incorporated that environment into his piece by recreating the iconic Air Jordan sneaker out of sand and acrylic. The opposing materials reflect the different sense of time and the piece as a whole functions as a letter to the future about today’s consumption. His work is set to showcase at the YICCA exhibition in Milano, Italy at the Hernandez Art Gallery starting in June.

After 15-years working in the world of design, Yamazaki expanded his talents into the world of art. His sense of awe about the natural world and feelings about the concept of absolute beauty often play a central theme in his work. Some of his pieces such as “UNIT FOR Y-AXIS”, “Sheet Music for Blank Space”, and “In Praise of Shadow” are based on different concepts and compositions but they all reveal fundamental absolutes. Yamazaki also utilizes the concept of “unused time” in his pieces, something he mentions is often depicted alongside the concept of nature. Each of these concepts play into Yamazaki’s pursuit of “new absolutes within relativity.” His artistic process follows the idea of the incidental power of nature and the act of incorporating chance which cannot be controlled by oneself into his works.

Seitaro Yamazaki is a conceptual artist based in Tokyo, Japan. He showcases exhibitions and installations all over the world, often depicting the theme of elements omitted from evolution in each of his pieces.

Yamazaki is the founder and director of Seitaro Design, Inc., radio personality of FM Yokohama’s “Culture Department” and the creative advisor of the Tokyo’s 2020 Olympic and Paralympic Organization Committee. He has received many awards such as the Good Design Award, Asian Design Award, and the 14th Arte Laguna Prize.

Seitaro Design, Inc., was established in October 2008 at THE WORKS ANNEX 1F 3-17-9 in Aobadai Meguro-ku, Tokyo with Seitaro Yamazaki as the Representative Director.