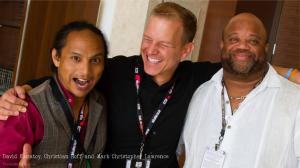 Mark Christopher Lawrence is the recipient of the 2012 San Diego Critics Circle’s Craig Noel Award – Outstanding Actor Of The Year. He is an international headliner who has worked with the likes of Sinbad, Jerry Seinfeld, Rodney Dangerfield, and Jeff Foxworthy. Mark is best known for his series regular role as Big Mike on the NBC TV series CHUCK and has a recurring role on The PureFlix.com comedy hit, Malibu Dan, The Family Man. A strong supporter of youth actors and previous host of the 38th Young Artist Academy™ Awards, Mark will present the award for Supporting Role by a Young Artist in a Feature Film.

Christian Hoff is a Tony Award-winning native San Diego entertainer whose early training through the San Diego Junior Theater program set a course to Hollywood and Broadway. He has recorded two Grammy Award-Winning original cast albums for “Jersey Boys” and “The Who’s Tommy.” Christian’s resume is highlighted with originating the voice of Hanna-Barbera cartoon “Richie Rich.” This will be Christian’s first invitation by the Young Artist Academy™ where he will present the award for Supporting Role by a Teen Artist in a Feature Film.

David Kamatoy is host of The DavidKamatoy.com Show. As a television producer, he has been responsible for hundreds of episodes of business and lifestyle talk shows seen on BizTV and Youtoo America. David has worked closely with both Mark Christopher Lawrence and Christian Hoff over the years on a variety of entertainment and business projects. While he has been involved behind the scenes with the Young Artist Academy™, this will be David’s first invitation as a presenter. He will present the award for Leading Teen in a Web Series.